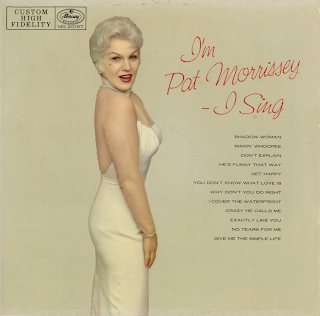 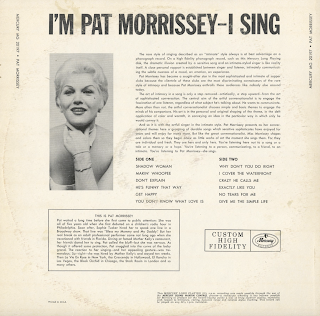 From the back cover: Pat waited a long time before she first came to public attention: She was all of five years old when she first debuted on a children's radio hour in Philadelphia. Soon after, Sophie Tucker hired her to speak one line in a Broadway show. That line was "Bless my Mommy and Daddy." But her real break as an adult professional performer came not long ago when she vacationed with friends in Florida. Dining at famed Mother Kelly's restaurant, her friends dared her to sing. Pat called the bluff–but she was nervous. As through it offered some protection, Pat snuggled into the curve of the baby grand. The reaction to her singing – and her appealing gesture – was tremendous. So – right – she was hired by Mother Kelly's and stayed ten weeks. Then La Vie En Rose in New York, the Crescendo in Hollywood, El Rancho in Las Vegas, the Black Orchid in Chicago, the Stark Room in London and so many others.

From Billboard - December 22, 1956: Miss Morrissey is a reasonably talented performer of the intimate night club variety. Unfortunately, the slightly little-girlish quality of the voice doesn't get over as well on the disk as it likely does when the visual impression is there too. Gal is an eye-catching platinum blonde and that no doubt helps keep the ringsiders deeply interested. Singing-wise she tried to effect certain trademarks of the Billie Holiday style without too much success. As soft cocktail hour, hand-holding fare, however, the album may get a fair response.

Shadow Woman
Makin' Whoopee
Don't Explain
He's Funny That Way
Get Happy
You Don't Know What Love Is
Why Don't You Do Right
I Cover The Waterfront
Crazy He Calls Me
Exactly Like You
No Tears For Me
Give Me The Simple Life
Posted by By Mark Betcher at 5:54 PM