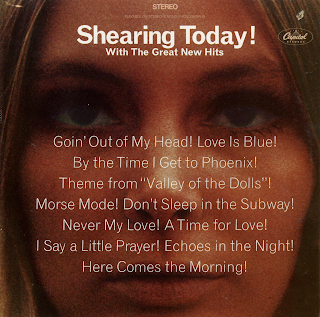 From Billboard - April 20, 1968: Happily, time has not dimmed George Shearing's sparkling talents. On the contrary, those who recall his last appearances here more than seven years ago, at Birdland and Basin Street East, will find, however brief, his unaccelerated style with its exciting understatements very much intact and stronger than ever.

Opening at the Rainbow Grill for the start of an 18-day engagement, the Capitol Records artist led a quintet in a section of wide ranging tunes accented by his broad and witty arranging.

Unhappily, in accordance with the Grill's policy, the jazz pianist geared his material purely to dancing. This smacked of compromise, not in performance but in the type of type of chosen. This is especially so when one also remembers that unswerving "pure" jazz innovator who made simply listening both a pulsating and pleasurable experience.

He did get an opportunity, however, to spotlight in old fashion, "Lullaby of Birdland," "I'll Never Smile Again" and "The Continental," all of which gained applause. Other tunes were from his latest album, "Shearing Today!" and were departures from those on the LP, which featured a Latin Beat, chorus, strings, etc.

Next stop for Shearing should be the concert scene or in a small club, where the jazzman's rhythmic metaphors can be heard, not used. – Robert Sobel

Goin' Out Of My Head
A Time For Love
I Say A Little Prayer
Echoes In The Night
Don't Sleep In The Subway
By The Time I Get To Phoenix
Love Is Blue
Theme From "Valley Of The Dolls"
Never My Love
Here Comes The Morning
Morse Mode
Posted by By Mark Betcher at 4:49 AM