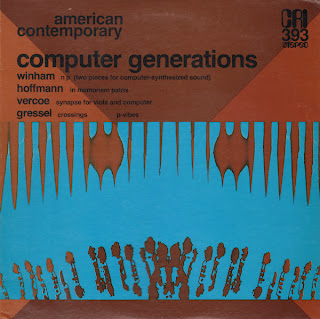 Enjoy a sample from this obscure CRI album.

From the back cover: This recording contains three "generations" of computer composers whose music users three generations of computer music languages. The late Godfrey Winham is recognized as a prime force in the development of computer music – he was responsible of the FORTRAN version of Music IV, the original program developed in 1960 by Max Matthews of Bell Telephone Laboratories. Barry Vercoe was Winham's student at Princeton and there invented a more streamlined language, Music 360, now in wide use. The newer Music - 11 system was developed by Vercoe at M.I.T. Richard Hoffman and Joel Gressel did there work at M.I.T. and Princeton respectively, Hoffman using Vercoe's Music - 11 and Gressel using Music 360.
Posted by By Mark Betcher at 5:05 AM