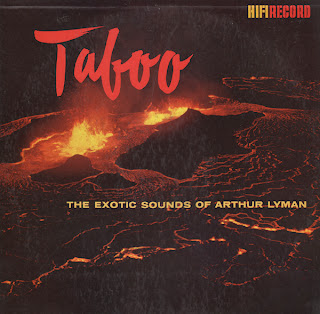 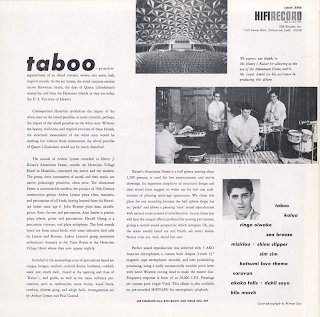 Highly recommended exotica set followed a year and a number of albums later by Taboo Vol. 2.

From the back cover: The sounds of Authur Lyman recorded in Henry J. Kaiser's Aluminum Dome, outside the Hawaiian Village Hotel in Honolulu, contrasted the native and the modern. The group, their instruments of sound, and their music, are native, pulsatingly primitive, often eerie. The Aluminum Dome is unmistakably modern, the product of 20th Century construction genius. Arthur Lyman plays vibes, marimba, and percussions of all kinds, having learned from his Hawaiian father since age 6. John Kramer plays bass, ukulele, guitar, flute, clarinet and percussions. Alan Soares is pianist, plays celeste, guitar and percussions. Harold Chang is a percussion virtuosos and plays xylophone. The bird sounds heard are from actual birds, with some imitative bird calls by Lyman and Kramer. Arthur Lyman's group entertains enthusiastic listeners in the Tiara Room at the Hawaiian Village Hotel where they now appear nightly.

Kaiser's Aluminum Dome is a half sphere, seating about 1,500 persons is used for live entertainment and movie showings. Its ingenious simplicity of structural design and ideal sound form suggest its wider use for low cost auditoriums of pleasing space-age appearance. We chose this place for our recording because the half sphere shape has no "peaks" and allows a pleasing "easy" sound reproduction with natural room acoustical reverberation. As you listen you will hear the unique effects produced by moving percussions, giving a certain sound perspective with intrigues. Oh, yes, the ocean sounds heard are real. Pacific salt waves. Native cries are, well, weird but real.

From Billboard - March 17, 1958: A hit of several high fidelity shows, this package is must material for sound afficionados. Arthur Lyman's exotic sounds, bongos, timbale, Chinese gong, conch shell, wood blocks etc. make this a masterpiece of engineering skill and top musicianship. Music is essentially Hawaiian-Polynesian. The sounds generate an aura of being there. Will sell on first hearing