My Own Quiet Way - Johnny Costa 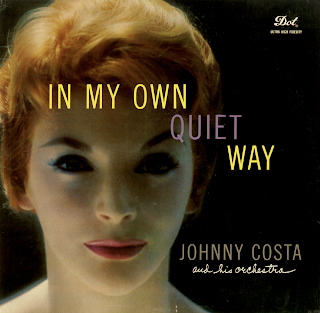 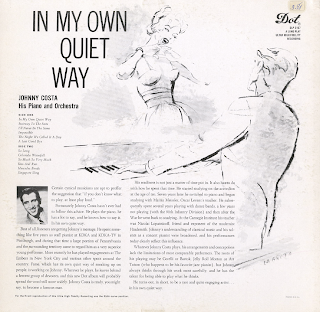 From the back cover: Certain cynical musicians are apt to proffer the suggestion that "if you don't know what to play, at least play loud."

Fortunately Johnny Costa hasn't ever had to follow this advice. He plays the piano, he has a lot to say, and he knows how to say it. In his own quiet way.

Best of all, listeners are getting Johnny's message. He spent something like five years as staff pianist at KDKA and KDKA-TV in Pittsburg, and during that time a large portion of Pennsylvania and the surrounding territory came to regard him as a very superior young performer. More recently he has played engagements at The Embers in New York City and various other spots around the country. Fame, which has its own quiet way of sneaking up on people, is working on Johnny. Wherever he plays, he leaves behind a fervent group of devotees, and this new Dot album will probably spread the word still more widely. Johnny Costa is ready, you might say, to become a famous man.

In My Own Quiet Way
Stairway To The Stars
I'll Never Be The Same
Impossible
The Night We Called It A Day
A Last Good Bye
So Long
Colorado Waterfall
So Much So Very Much
Kiss And Run
Mercedes Bends
Singapore Sling
Posted by By Mark Betcher at 7:45 AM