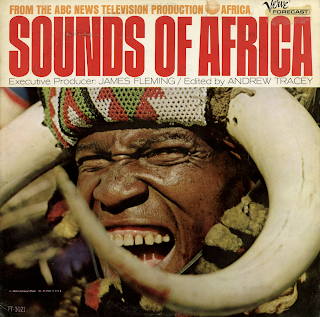 From the back cover: Introduction by Andrew Tracey - In June 1966, ABC Television News, New York, sent ten camera crews to Africa to make a full-length feature film covering every aspect of modern Africa – everything from politics to big game. Eight months and more than a million dollars later they came back with probably the most fascinating and complete film coverage of a continent ever made. In the course of traveling this most musical continent it was inevitable that they should have filmed a rich variety of its music makers or all kinds, hence this record... a selection from the many hours of music recorded by the "Africa Project" teams. I have chosen numbers that I consider to be most representative of the enormous variety of the musical sounds and moods of Africa. Obviously there are gaps, but it would take many more years, and dollars, to do justice to the music alone.

Most of the music on this record was recorded with folk performers who were unaccustomed to directing their attention to a microphone, and by camera teams whose first interest was generally visual rather than aural, so naturally many of the tracks do not have the quality of studio recordings. Note that the final version of the "Africa" film may not include all of the music on this record.

Nigera
a. Folk Opera
b. Egungun

Ghana
a. Stand up for Jesus
b. Mammy wagon

Botswana
a. Bushman mbira
b. Bushman dance
Posted by By Mark Betcher at 5:58 PM