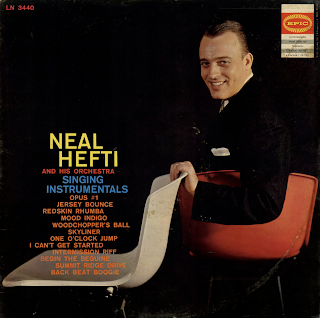 From the back cover: Born in Hastings, Nebraska, in 1922, Neal Hefti took up the study of the trumpet in the sixth grade, playing in the high school band and orchestra. Taking top honors in interstate high school trumpet competitions, he filled in the summers by playing with carnivals. Moving to New York after graduation, he spent his first four months there in the hospital, as the result of an automobile accident, and then got his first break playing with Charlie Barnet, In 1942, he played with or made arrangements for such well-known musicians as Muggsy Spanier, Earl Hines and Bobby Byrne, and later joined Charlie Spivak's orchestra. During this time he scored "Pin Up Girl," and played with Horace Heidt on his radio program.

In 1944, he joined Woody Herman and turned in such vivid arrangements as Caldonia, The Good Earth, Wildroot, Apply Honey, Northewest Passage and others that have become classics in modern jazz. Moving to Los Angeles, he played with Bob Chester and Frank DeVol, as well as a number of network radio shows. Then, returning to the Herman Herd, he married Frances Wayne, then vocalist with the orchestra. Work in motion pictures, recording studios and radio stations followed, including two years with Harry James and his Orchestra, and in 1949 he returned to New York to work in television. From 1951 until late 1953, he led his own group, the Hefti-Wayne Orchestra, and since that time has been one of the most sought-after arrangers in the business.