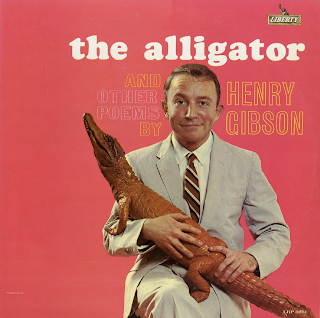 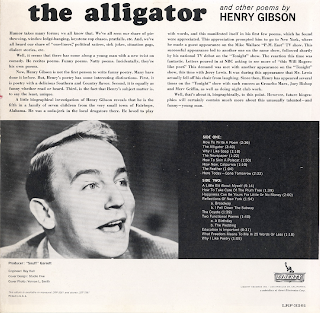 From the back cover: A little biographical investigation of Henry Gibson reveals that he is the fifth in a family of seven children from the very small town of Fairhope, Alabama. He was a soda-jerk in the local drugstore there. He loved to play with words, and this manifested itself in his first few poems, which he found were appreciated. This appreciation prompted him to go to New York, where he made a guest appearance led to another one on the same show, followed shortly by his national TV debut on the "Tonight" show. The reaction this time was fantastic. Letters poured in at NBC asking to see more of "this Will Rogers-like poet." This demand was met with another appearance on the "Tonight" show, this time with Jerry Lewis. It was during this appearance that Mr. Lewis actually fell off his chair from laughing. Since then, Henry has appeared several times on the "Tonight" show with such emcees as Groucho Marx, Joey Bishop and Merry Griffin, as well as doing night club work.

From Billboard - November 2, 1968: Henry Gibson, a regular on NBC's "Laugh-In," has returned to the music business after a seven-year absence, with an album, "The Grass Menagerie," and a single, "Flowers," on Epic Records.

In 1961, Liberty Records discovered Gibson on the Jack Paar TV show and recorded an album, "The Alligator and Other Poems," with Gibson singing and reading poetry. "The album bombed in 1961," he said, "but Liberty reissued it this year to take advantage of the show's success."

Liberty is not the only record label to jump on the "Laugh-In" bandwagon. Reprise Records signed Jo Anne Worley to a contract, with her single being a Paul Anka-written tune, "Why Won't You Come Home?" Epic recently a Dan Rowan - Dick Martin album, "Laugh-In."

Gibson, who produced his own album, teamed with Fred Werner on a follow-up album on the American Indian. The "Grass Menagerie" examines the hippieish movement through poetry, songs and comedy, said Gibson, who spent a week in San Francisco's Haight-Asbury District gathering material.

"The album looks a hippies and the hippie movement "with sympathic humor," he said. "For the next album, on Indians, I'll spend time gathering material on a reservation."

During spoken word segment of the "Grass Managerie," Werner has arranged contemporary music for background support, with the album's five songs also in a contemporary vein.

Gibson spent 10 weeks touring with the Rowan and Martin cast, preparing and testing his album material before audiences at the Sahara Hotel, Lake Tahoe. "I had a seven-minute spot on the nightclub show," said Gibson, "and I'm hopeful I can get on the TV show to do a few songs and recite some poetry."

Because of the show's tight shooting schedule, Gibson can only do promoting work on the album via the telephone. He plans a phone campaign to disk jockeys on underground and easy listening stations.

How To Write A Poem
The Alligator
Why I Like Soap
The Newspaper
How To Skin A Polecate
How Now, Calpurnia
The Feather
Here Today – Gone Tomorrow
A Little Bit About Myself
How To Take Care Of The Plum Tree
Happiness Can Be Yours For Little Or No Money
Reflections Of New York (Broadway & I Fell Down The Subway)
The Coyote
Two Functional Poems (A Birthday & The Wedding)
Education Is Important
What Freedom Means To Me In 25 Words Or Less
Why I Like Poetry
Posted by By Mark Betcher at 6:02 PM