The Touch Of Gold - Charlie Byrd 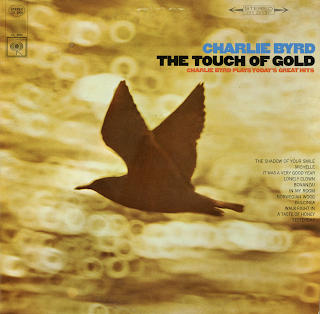 From the back cover: In his new album, The Touch Of Gold, guitarist Charlie Byrd concentrates for the most part on hit songs, the kind of ear-catching material you find at the top of today's best-selling record lists and hear frequently played on the radio.

You might think there's nothing at all surprising about this, since many musicians are currently turning to the best in popular music for their repertoire. But those who know Byrd well will surely find it a surprise, for this is a new departure for him. And everyone – from long-standing Byrd fans to those who perhaps are encountering his guitar for the first time – will quickly realized that he has done a fascinating job, delivering a series of performances that seem likely to outlast by far the usual life span of a popular song hit.

Actually, it's characteristic of Charlie to take on a new kind of project: he has flourished in more varied setting than almost any musician you can think of. And, in defiance of cliches about Jack-of-all-trades being masters of none, and of the general belief that a man with many strings to his bow can't really hit the bull's-eye in this Age of Specialization, he has carved out a remarkably distinguished reputation in many years in which The Showboat (in Washington, D.C.) has served as his most frequent home base, he has built a following that ranges from diplomats and congressmen to awestruck jazz enthusiasts. Byrd is quite at home with the blues and with folk music, and there are also albums that demonstrate his considerable capabilities as a classical guitarist. I have heard him break it up with a Woody Herman combo, and I have been at The Showboat during a nightly phenomenon called "the quiet set," when the guitarist plays unaccompanied, and the management gets upset if anyone whispers or even orders a drink!

Charlie is probably most celebrated for having paid close attention, during a State Department-sponsored tour, to a native Brazilian rhythm, whereupon he became the first and among the foremost North American exponents of bossa nova.

Now, as Byrd turns his own particular golden touch towards some golden hits, the results are – as you'd expect – happily non-routine. These are mostly pop hits, but Charlie has selected them with careful taste and an ear for lasting musical values. There is the song of the year, the Oscar-winning Shadow Of Your Smile, with more than a shadow of Byrd bossa-nova feeling to it. There are some of the superior melodies of Beatles John Lennon and Paul McCartney, including the Byrd treatment of such destined-to-be-standard tunes as Yesterday and Michelle. There's the Sinatra-linked It Was A Very Good Year, and a brash paralleling of the Tijuana approach to A Taste Of Honey. In addition, Charlie plays the lovely ballad Dulcinea from one of the year's hit musical, Man Of La Mancha," and a couple of items that lend themselves felicitously to the Country music and folk-song side of his nature: the theme from that television mother lode, "Bonanza!," and a recent rousing hit, Walk Right In.

Charles Calello's expert arrangements, which make inventive use of the strings, horns, voices and back beat of contemporary scoring, provide striking contrast to the brilliantly etched sound of Charlie Byrd's unamplified guitar – clear and clean, bright and emotional and altogether distinctive.

From Billboard - July 2, 1966: Charlie Byrd add to his credentials as a guitarist. Scorning amplification, Byrd gives crisp and sensitive performances of "Shadow Of Your Smile," "Michelle" and "Taste Of Honey." Charles Calello's arrangements and the use of horns and strings adds depth. The vocal background helps sometimes, but other times is a bit distracting.

In My Room
The Shadow Of Your Smile
Bonanza!
Yesterday
Norwegian Wood
It Was A Very Good Year
Dulcinea
Michelle
A Taste Of Honey
Lonely Clown
Walk Right In
Posted by By Mark Betcher at 5:39 PM