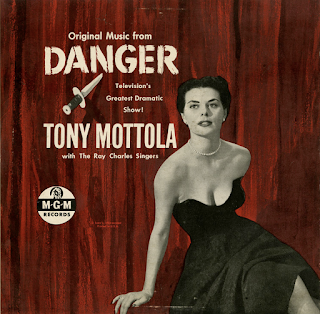 From the back cover: One of the most popular and long-lived shows created thus far by the infant TV industry is Danger, the CBS series and specializing in tales of mystery, terror, and the supernatural. Boldly experimental, the program can trace much of its success to fresh, often flamboyantly "different" production devices which give it a strong usual background music which helps to hold DANGER "regulars" spellbound week after week. At the very outset of the series, the creators of DANGER felt the need of finding something new in the way of musical atmosphere. The usual orchestral background music was discarded as too heavy and too obvious. A single instrument seemed called for, but the only one capable of a wide dramatic range that suggested itself was the organ – which was ruled out immediately because of its long-term association with radio's soap-operas. The problem was solved finally by the note guitarist Tony Mottola who proved to the producers of the show that the strings, plectrum-pick, and sound box of his instrument when used with imagination and skill could produce an amazing range of effects and carry a full show completely on its own. It could not only set moods, bridge breaks in action, and accentuate specific lines of dialogue in a completely unique way. Almost as soon as he joined the staff of DANGER, Mottola started to receive fan mail of his own and requests for copies of the music which he had provided for outstanding programs in the series. As the letters stacked up higher and higher, it became evident that he had created music of more permanent value that is usually the case with background scores. Finally, he was called upon to arrange certain of the best DANGER scores in solo guitar form for publication by George Paxton Music, Inc. Since one of his many other activities is arranging and conducting for all of the recording sessions of popular MGM vocalist Johnny Desmond, it was natural that MGM RECORDS should follow suit and give him free reign to adapt this music to records. This called for the expansion of his themes and sketches into more lengthy and detailed scores. An easy transfer could have been effected by arranging "suites" for performance by solo guitar and orchestra. Mottola felt, however, that much of the impact and originality of his material would be lost in this way. He had worked closely with talented choral conductor-arranger Ray Charles or record dates and had often discussed the almost untapped potentialities of choral groups with him. The two got together with a pile of Mottola's cue-sheets from DANGER and "let themselves go". Unrestricted by lyrics, except in the single case of the chilling chant in the Sredni Vashtar Suite, Charles devised through wordless sounds alone such extraordinary effects as the calliope chorus in Carnival Time. Experienced hands at recording, Mottola and Charles also experimented with using microphones and sound equipment in startling new ways. These technical "tricks" thus make this into an album of music designed specifically for records – in fact, one of the very first such albums ever recorded. When listening, to this fascinating music, remember that all of the strange, wonderful, and often amazing sounds presented here are produced solely by the fabulous guitar of Tony Mottola and the voices of the Ray Charles Singers.