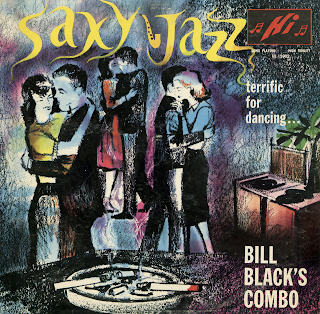 From the back cover: This album brings to you the sound of Bill Black

Bill Black shares with one other man the distinction of having performed on more million-selling records than any other instrumentalist. As someone once remarked, people may not have remembered the name, but they could not forget the bass.

For Bill Black's inventive, driving, yet disciplined bass playing has been heard countless times, almost everywhere modern music is played, in almost every country of the world.

With his old cohort, Guitarist Scotty Moore, Bill played on 21 Gold Records, backing Elvis Presley. They were with Elvis in those hungry days when they made 800-mile jumps in beat-up second-hand cars through the South and South-fairs. They were in on that fabulous climb to glory, playing before 30,000 in Dallas, before the glittering sophisticates in Las Vegas, on the big TV Shows of Sullivan and Allen, before shrieking crowds from Vancouver to Miami, from New York to Waikiki Beach.

"I've had my bass stomped to splinters in Kansas City, and I've had my clothes plucked off like chickens eat corn," Bill remembers. "Mostly, it was so loud we couldn't even hear ourselves when we hit a sour note."

With 21 gold records behind them, Bill and Scotty made it 22 when they teamed up behind Thomas Wayne on the Fernwood cutting of "Tragedy."

The sensational acceptance of "Smokie" led to this album, which is authentic Bill Black.

It was recorded in Hi Studio in Bill's home town, Memphis, Tenn. The studio is an old movie theater, The Royal, with the seats torn out, the engineer sitting where the screen used to be, a special echo chamber built on one side, and a fabulous sound. "Tragedy" was was recorded here also.

The personnel of this album is the same as that on the "Smokie" single, with the exception of Martin Willis, sax, who was unavailable.

Leads are Carl McVoy, piano, a stylist in his own right; Johnny Cannon on sax and Reggie Young on guitar. Jerry Arnold is on drums, and Bill, of course, on bass.

The music is what Bill calls "long time ago songs."

"Smokie," which is a Black original, is not so much a composition, he says, as "just a blues idea, and a way of playing."

Black told his men to keep it simple, play it the way they felt, and let that rolling, slow Kansas City beat make it go.

The acoustical quality of the studio fascinated them. A mike was hung in the opened door of the echo chamber, and the lead was played right into it. Cannon couldn't get enough of it, wanted to keep right on blowing into that open door, vowed he would build one like it of his own at home so he could blow in it whenever he wanted.

Bill said this session had him so bewildered he didn't know what had happened until the playback. "It's a fight, man, it's a fight, but when you hit it you know you're on it," he said. And the sound came out good.

Bill is a big, jolly man, with a temper that sometimes flares up, but mostly he's for laughs and music the way he likes it.

He lives with his wife, Evelyn, and two children, Louis, 12, and Nancy, 8, in Memphis. – Robert Johnson