The Voice Is Rich - Buddy Rich 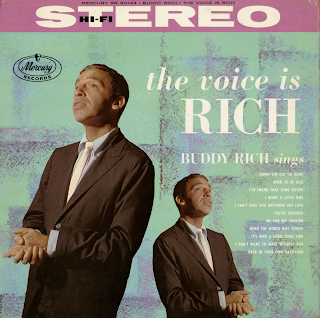 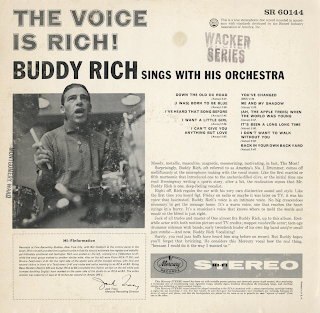 From the back cover: Moody, metallic, masculine, magnetic, mesmerizing, motivating, in fact, The Most!

Surprisingly, Buddy Rich, oft referred to as America's No. 1 Drummer, comes off mellifluously at the microphone making with the vocal music. Like the first martini or fifth martoonie that introduced on to the anchovie-filled olive, or the initial time one read Hemmingway writing a sports story, after a bit, the realization comes that Mr. Buddy Rich is one, deep-feeling vocalist.

Right-off, Rich regales the ear with his very own distinctive sound and style. Like the first time you heard Sgt. Friday on radio or maybe it was later on TV, it was his voice that fascinated. Buddy Rich's voice is an intimate voice. No big crescendos necessary to get the message home. It's a warm voice, one that reaches the heart strings in a hurry. It's a musician's voice that knows where to meld the words and music so the blend is just right.

Jack of all trades and master of One almost fits Buddy Rich, up to this album. Erstwhile actor with both motion picture and TV credits; moppet vaudeville actor; teen-age drummer sideman with bands; early twentiesh leader of his own big band and/or small jazz combo – And now, Buddy Rich Vocalizing!

Down The Old Ox Road
I Was Born To Be Blue
I've Heard That Song Before
I Want A Little Girl
I Can't Give You Anything But Love
You've Changed
Me And My Shadow
Ah, The Apple Trees When The World Was Young
It's Been A Long Long Time
I Don't Want To Walk Without You
Back In Your Own Back Yard
Posted by By Mark Betcher at 3:04 PM