The Night Was Made For Love - Tony Martin 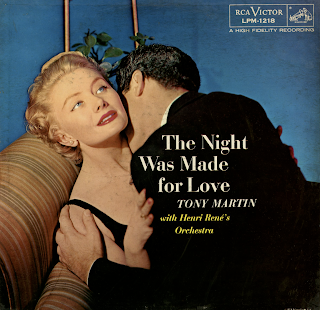 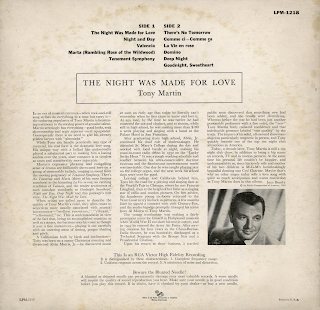 From the back cover: A California both by birth and inclination – Tony was born on a sunny Christmas morning and christened Alvin Morris, Jr. – he discovered music at such an early age that today he literally can't remember when he first came to know and love it. At any rate, by the time he was twelve he had mastered the sax and clarinet, and at sixteen, while still in high school, he was making more than $100 a week playing and singing with a band at the Palace Hotel in San Francisco.

After graduating from high school, Alvin, Jr. continued his dual role of student-singer. He attended St. Mary's College during the day and worked with local bands at night, making his coast-to-coast radio debut in 1932 on the "Lucky Strike Hour." It was a rough working schedule and conflict between his ultra-conservative daytime environs and the flamboyant entertainment world was inevitable. One day he was caught playing jazz on the college organ, and the next week his school days were over for good.

Leaving college and California behind him, Tony hit the road for a playing and singing date at the World's Fair in Chicago, where he met Frances Langford, then at the height of her fame as a singing star of radio and motion pictures. On her advice, the handsome young six-footer returned to the West Coast to try his luck in pictures. A few months later he signed a contract with 20th Century Fox, and the studio bigwigs promptly changed his name from Al Morris to Tony Martin.

The young troubadour was making a fairly prominent name for himself in Hollywood musicals when World War II cut short his movie career, and in 1942 he entered the Army Air Force. After serving overseas for four years in the China-Burma-India theater, he was honorably discharged as a Technical Sergeant with the Bronze Star and a Presidential Citation.

Upon his return to show business, a startled public soon discovered that something new had been added, and the results were electrifying. Whereas before the war he had been just another personable performer with a fine voice, the "new" Tony Martin fairly radiated confidence and that indefinable presence labeled "star quality" by the trade. The impact of his solid, all-around showmanship was particularly magnetic in person, and Tony quickly became one of the top ten night club attractions in America

Today, a decade later, Tony Martin is still a top night club draw, in addition to being a big name on records, TV and in motion pictures. At the same time his personal life couldn't be happier, and understandably so, since his lovely wife and mother of his two children is M-G-M's breathtaking beautiful dancing star Cyd Charisse. Maybe that's why no other singer today sells a love song with quite as much anticipation and warm conviction as Tony Martin does in this album. – June Bundy