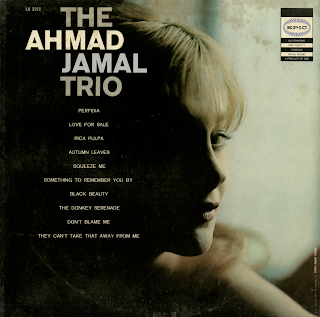 From the back cover: Jamal's subtle keyboard structures were first heard with George Hudson's Orchestra insofar as public performance is concerned. A few years later he broke away to form his own group, known as Ahmad Jamal's Three Strings, and with this trio he played throughout the midwest and in New York, attracting considerable attention with his deft articulations. The Three Strings made a number of single records for Epic Records, collection as a best-selling Extended Play disc, and then returned to Chicago. The present group, heard in the first Jamal Long Playing Record, consists of Israel Crosby on bass and Ray Crawford on guitar, in addition to the leader.

Perfidia
Love For Sale
Rico Pulpa
Autumn Leaves
Squeeze Me
Something To Remember You By
Black Beauty
The Donkey Serenade
Don't Blame Me
They Can't Take That Away From Me
Posted by By Mark Betcher at 4:09 PM