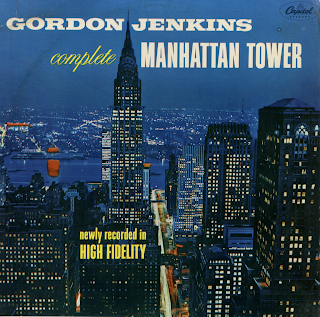 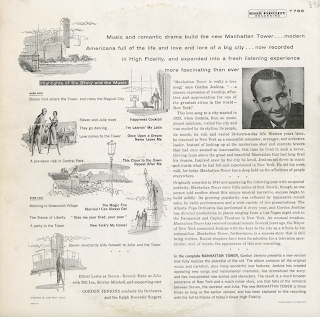 From the back cover: "Manhattan Tower is really a love song," says Gordon Jenkins, "...a sincere expression of worship, affection and appreciation for one of the greatest cities in the world – New York."

This love song to a city started in 1929, when Jenkins, then an unemployed musician, visited the city and was excited by its skyline, its people, its moods, its rich and varied 24-hours-a-day life. Sixteen years later, he returned to New York as a successful composer, arranger, and orchestra leader. Instead of looking up at the mysterious steel and concrete towers that had once seemed so inaccessible, this time he lived in such a tower, viewing from above the great and beautiful Manhattan that had long fired his dreams. Inspired anew by the city he loved, Jenkins set down in music and words what he had felt and experienced in New York. He did his work well, for today Manhattan Tower has a deep hold on the affections of people everywhere.

Originally recorded in 1945 and appearing the following year with no special publicity, Manhattan Tower drew little notice at first. Slowly, though, as one person told another about this unique musical narrative, success began to build solidly. Its growing popularity was reflected by impressive record sales, by radio performances and a wide variety of live presentations. The Atlanta Pops Orchestra has performed it every year, and Gordon Jenkins has directed productions in places ranging from a Las Vegas night club to the Paramount and Capitol Theaters in New York. An unusual creation, Manhattan Tower has received unusual honors. Several years ago the Mayor of New York presented Jenkins with the keys to the city as a tribute to his composition. Manhattan Tower, furthermore, is a success story that is still being written. Recent chapters have been its selection for a television spectacular, and, of course, the appearance of this new recording.

In the complete Manhattan Tower, Gordon Jenkins presents a new version that fully realizes the potential of the old. The album contains all the original music and narration, plus many wonderful new features. Jenkins has created appealing new songs and instrumental interludes, has dramatized the story, and has incorporated new scenes and characters. The result is a much broader panorama of New York and a much richer story, one that tells of the romance between Steven, the narrator, and Julie. The new Manhattan Tower is three times as long as the earlier version, and has been captured in this recording with the full brilliance of today's finest High Fidelity.

From Billboard - September 22, 1956: Jenkins new "Manhattan Tower" spotlights more than seven new songs. The original Decca package sold more than 500,000 copies, altho Jenkins wouldn't allow it to be played on the air for the first three or four years.
Posted by By Mark Betcher at 6:40 PM