Do Re Mi In Dance Time - Jule Styne and Eddie Heywood 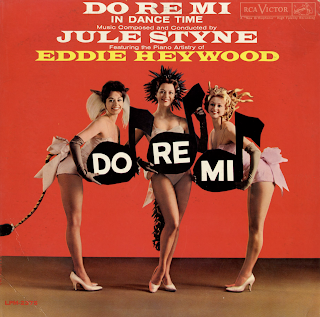 From the back cover: The many and distinguished talents of Jule Styne have created a pattern unique in the annuals of modern American music. As a child prodigy, his pianistic prowess was acclaimed by audiences who heard him perform with the country's leading symphony orchestras. While still in his early teens and seeking new worlds to conquer he deserted the classical field to play in orchestras beside such greats as Big Beiderbecke, Benny Goodman, Ben Pollack, Glenn Miller and countless others. This valuable apprenticeship inspired him to form his own band in which he played, arranged, conducted, and first tried his hand at writing songs. (Sunday, written thirty-four years ago remains an all-time standard.)

Mr. Styne's quicksilver curiosity drew him to Hollywood where, as vocal coach and arranger, he helped launch the careers of Alice Faye, Tony Martin, Doris Day and many others. Dissatisfied with the songs used during this period, he began dabbling in composition once more and with skyrocket brilliance catapulted him himself overnight into the top echelon of ASCAP. You could always hear the latest Jule Styne song by tuning in on the "Hit Parade." Triump followed triumph until he regarded his success as excess. The creative instinct in the man was restless, unfulfilled.

So to Broadway – and almost overnight the die was cast; he became not only the composer of long-run smash musicals, but also a remarkably successful producer. As a composer, some of his hits were "High Button Shoes," "Gentleman Prefer Blondes," "Bells Are Ringing" and "Gypsy"; and as a producer, a brilliant revival of "Pal Joey" (conceded to be far better than the original production), "Mr. Wonderful," "Say Darling" and "Will Success Spoil Rock Hunter?".

Also from the back cover: For the arrangements, he (Styne) has chosen Henri Rene who for several years was A&R man for RCA Victor records on the west coast. Mr. Rene was selected not only for his obvious talents as the guiding force behind so many memorable records of the past, but also for his personal understanding of Mr. Styne's creativity, musical temperament and purposes. For piano soloist, Mr. Styne has chosen Eddie Heywood, surely on of the most articulate and inventive artists of modern jazz.

Make Someone Happy
Ambition
Cry Like The Wind
Adventure
All Of My Life
Fireworks
Asking For You
Take A Job
What's New At The Zoo
I Know About Love
It's Legitimate
Posted by By Mark Betcher at 4:05 PM