After The Lights Go Down Low - Al Hibbler 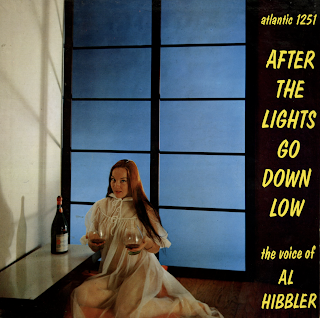 After The Lights Go Down Low
The Voice Of Al Hibbler
Cover: Bill Hughes
Atlantic 1251
1958

Available from online vendors so I will not be posting a sample. Presented here to share the original cover art and jacket notes excerpts.

From the back cover: Al Hibbler, one of the most important of today's male vocalists, hardly needs introduction. Nor do the splendidly chosen songs he sings. He, Al Hibbler – the vocal pantomimist – first attracted professional attention singing with local aggregations in the middle-west and the south. He so impressed Duke Ellington that he was invited to join that legendary organization and remained on as male vocalist with Duke for eight highly successful years.

He was born in Arkansas and attended the school for the blind in Little Rock. When he was about fourteen or fifteen years old, the urge to sing took hold. He had been exposed to the good jazz sounds of that day and although he can't recall when it started, he remembers that he began to sing along with records and bands for his own amusement. Al Hibbler and he thought to create a style of singing that was as much instrumental as vocal.

He recalls his early exposure to "swing" and "jazz". And it was quite an exposure. In Hibbler's formative years in the Rabbit Foot Minstrel included Little Rock in its itinerary and the yearly street parade heralding the Minstrel's coming was annually followed by little Al Hibbler hungrily drinking in the blaring sounds of brass and drums. He cultivated friendships too, with the ticket takers at the Skating Rink, the Dreamland, and the Mosaic Temple... for at these three halls, every name band in Swing made a stop at some time or other. Al Hibbler heard them all.

He worked for a lot of small bands after that. Then Duke Ellington, on one of his swings through the Southland, heard Al Hibbler. Duke put his stamp of approval on the lad and Hibbler's really big career was formally launched.

He's been a "single" now for the past several years. – Jack Walker

After The Lights Go Down Low
You Will Be Mine
Dedicated To You
Song Of The Wanderer
Tell Me
I'm Traveling Light
Autumn Winds
This Is Always
Now I Lay Me Down To Dream
If I Knew You Were There
I Won't Tell A Soul I Love You
The Blues Came Falling Down
Posted by By Mark Betcher at 5:07 PM