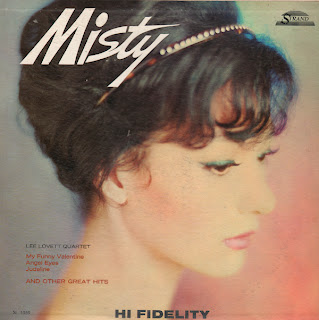 From the back cover: In his native Philadelphia, where Lovett began studying piano at the age of five, he is considered one of the top ranking musicians in the area. He did the arranging for most of the top local Philadelphia dance bands in the mid-forties, and left to enter the big dance band scene in New York around 1945.

It was about this time that Lee Lovett decided to enter the recording field, and started handling sessions for Atlantic, Herald, Mercury, Columbia and RCA Victor. In 1952, he join forces with the great Johnny Hodges and Al Sears, to form one of the finest combos of that era, the "Castle Rock" group.

It was during this period that the talented Mr. Lovett wrote such pop hits as "Can't I," "After The Lights Go Down Low," " Why," and "All At Once." He also organized a big Afro-American band to produce albums of pop American tunes with Latin rhythms for RCA Victor and Columbia Records.

A stint in California followed with Clef and Norgan Records, where Lovett worked with Norman Granz, in writing and arranging albums for Al Hibber, Billie Holiday, Bud Powell, Buddy Rich, and many others.

My Ship
If It's The Last Thing I Do
Can't I
Judaline
Angel Eyes
A.B.C. Hop
Misty
My Funny Valentine
Plum Street
Posted by By Mark Betcher at 8:18 AM