Modern Art And The Gospel 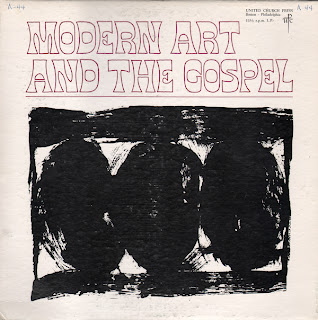 Here's an obscure and interesting spoken word/jazz album that was created to go with a filmstrip.

From the back cover: In this forceful examination of the whole spectrum of modern painting, author-narrator, J. Thomas Leamon, shows us that the vision of modern artists such as Rouault, Picasso, Beckmann, Klee and Jackson Pollock is closely akin to the vision of the Prophets and See-ers of the Bible. The modern artist exposes the predicament of modern urban man which can be finally ministered to only through the gospel. Mr. Leamon is pastor of the Westfield Congregational Church in Danielson, Connecticut.

Composer-conductor, Robert Freedman, uses jazz instruments to create a score as biting and contemporary as the works of visual art examined here. The present work is scored for piano, clarinet, tenor saxophone, trumpet, bass and drums. Mr. Freedman, who has played with Maynard Ferguson, Woody Herman and Duke Ellinton, and written for Louis Bellson, Maynard Ferguson, Lionel Hampton and Jerry Mulligan, not only conducts his own work here but also plays, piano, clarinet and tenor saxophone. He has especially dedicated this composition to Duke Ellington.

From the enclosed booklet: The Reverend J. Thomas Leamon is minister of the Westfield Congregational Church. Danielson, Connecticut. A graduate of the Rhode Island School Of Design, he is an artist as well as a writer. Since entering the ministry he has continued his interest in art, especially in working with youth groups in writing and producing films and and filmstrips. He was the artist for the Church and Home curriculum filmstrip, Members One Of Another, and the writer for the United Church curriculum dramatic recording, On The Third Day.
Posted by By Mark Betcher at 9:50 AM