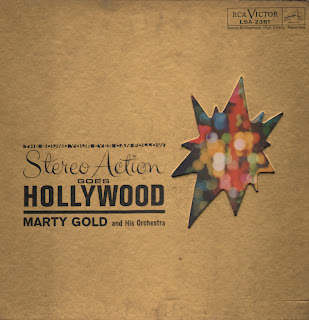 I collect the Stereo Action series for the covers first. If you aren't familiar, the heavy cardboard jacket normally has a shape die-cut through the cover on the front. The inside jacket features an abstract image the peeks through the cover.

The series was created to help promote RCA's  stereo engineering. Some LPs in the series, went overboard playing with the right and left channels. The entry isn't out to "ping-pong" you to death, but the vibe also isn't as "atomic" as other Action LPs I've collected.

From Billboard - May 29, 1961: In a brief period of several months, RCA Victor has successfully established its line of Stereo Action albums. It is known that each of the first four packages which were released during February and March sold about 35,000. – The Stereo Action line was RCA Victor's concept of Music In Motion and entails a deliberate effort to move the sound of instruments or voices from speaker to speaker to suspend the sound between speakers, etc. The packaging is deluxe, with detailed notes on studio equipment and a track by track breakdown of the music. – I recently debuted lines based on a concept of sound, it has been customary for the manufacturer to establish a monaural counterpart of the stereo version. RCA Victor has decided not to do this with Stereo Action.

Around The World
The Children's Marching Song
Song Of The Barefoot Contessa
Song From Moulin Rouge
The 3rd Man Theme
Gigi
Coloney Bogey
Moonglow and Theme From Picnic
The High And The Mighty
Tara's Theme
Baby, It's Cold Outside
Invitation
Posted by By Mark Betcher at 7:59 AM