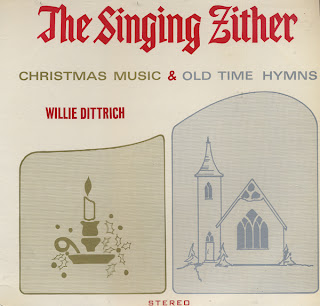 Here's a fun private press album found today at one of the thrifts I frequent.

From the back cover: The Singing Zither belongs to Willie Dittrich of the Amana Colonies in Iowa (Homestead, Iowa).

Although none of the venues are named, Dittrich played at least one local restaurant as well as other local venues including "one of eastern Iowa's local television programs."
Posted by By Mark Betcher at 2:10 PM