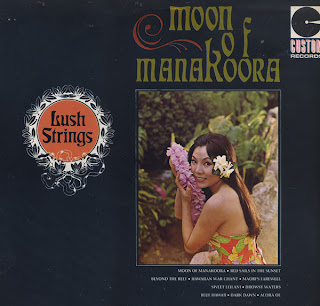 Saul Bihari, head of Crown Records, announced in a 1965 issue of Billboard a "new label" called Custom. Custom would feature his answer to Living Strings and be sold at discount prices ($1.98 or less). Recordings would be made domestically and in Europe.

There are a number of Lush Strings albums out there, including a few with interesting titles such as Spellbound and Ebb Tide.

This album is fully orchestrated mood that features some nice vocal touches to give the music a hint of tropical mysteriousness. However, I picked a nice dramatic cover of Hawaiian War Chant to feature as the sample above.
Posted by By Mark Betcher at 3:45 AM