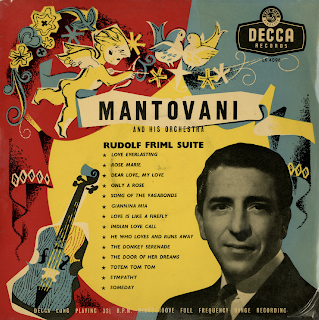 From the back cover: Mantovani was born into a musical family. His father was a Professor at two conservatories in Italy, where the Mantovani family had its origins, had played in orchestras under the baton of Mascagni and Toscanini, and was created a Cavalliere by the King of Portugal for his services to music. The family came to England when Mantovani Senior was playing with a touring Opera Company, and got stranded by the outbreak of the First World War. So it was not surprising that Mantovani should follow a musical career. He started on the violin at the age of fourteen, and made very rapid progress under his father's tuition. He was promised that when he could faultlessly play a certain difficult concerto he should have a Testori violin which has been presented to his father by a Russian princess. This is still one of his prized possessions. One of his proudest achievements was when, as a solo violinist, he played Saint-Saens' B minor violin concerto at Queen's Hall, London.

At sixteen he was a professional violinist, and two years later was leading his own quintet at the Midland Hotel, Birmingham. His next move was to the Hotel Metropole, London, and he began to broadcast regularly.

In the early 'thirties he formed his Tipica Orchestra and began a series of lunch-time broadcasts, from the Monseigneur Restaurant, Piccadilly, and remained there until this establishment closed. This was followed by engagements at the Cafe de Paris, and at the Hollywood and San Marco Clubs. He was then offered a contract with the Gaumont-British cinema and gained a great deal of experience in the stage presentation of an orchestra.

He has had considerable experience as a theatre orchestra conductor, with shows such as "Noel Coward's "Ace Of Clubs", "Pacific 1860" which featured Mary Martin and "Sigh No More", with Leslie Henson in "Bob's Your Uncle" and "And So To Bed", and for Stanley Lupino, Sally Gray, Pat Kirkwood, Lupino Lane and many others.

He first became a Decca recording artist in 1940, always enjoying great popularity, but it was the New Orleans formed in 1951 which really sent the sales soaring. This is an orchestra of forty musicians, mainly strings, and the incredible effects which we hear on this record are achieved without any tricks of recording. These are the sound which have taken America by storm as well as the British record-buying public; the performances are always as near perfect as is humanly possible and the effect, to put it mildly, is terrific.

Love Everlasting
Rose Marie
Dear Love, My Love
Only A Rose
Song Of The Vagabonds
Love Is Like A Firefly
Giannian Mia
Indian Love Call
He Who Loves And Runs Away
The Donkey Serenade
The Door Of Her Dream
Totem Tom Tom
Sympathy
Someday
Posted by By Mark Betcher at 5:27 PM