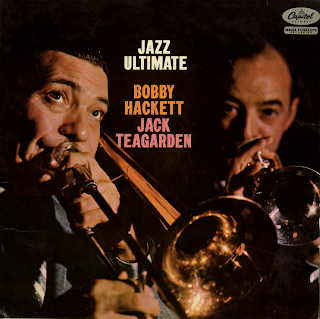 From the back cover: Bobby Hackett has, during a career that began at fourteen, successively dropped the banjo, violin, guitar and cornet, retaining his Besson trumpet and his unique lyricism. People unable to tell the difference between the kind of music that he reads with Horace Heidt and the kind he once made on "the street" (52nd, of course), have been so struck by his solos on Jackie Gleason's records that they have gone out of their way to discover that he is, yes, the Bobby Hackett – the one they heard play String Of Pearls with Glenn Miller, and the same who has led a versatile group at the Henry Hudson Hotel in New York City – a group accomplished in just about every style of jazz. (They can be heard on "Gotham Jazz Scene," Capitol T857.)

The story of how Jack Teagarden in Texas and Jimmy Harrison in New York independently developed a similar and completely new role for the jazz trombone is well enough known not to need repeating. The real point is that Teagarden is not content to rest on laurels already won, but is still a vital and important musician. Composer-arranger-trombonist Bill Russo (who is beat known through his association with Stan Kenton) has said that Teagarden is the best trombonist and that he invents like a composer, the "ultimate of the jazz improvisor." His style has also been justly pictured as that of a man setting out to do a rather complicated thing at the last possible moment, and doing it with the greatest of ease, relaxation and sureness.

Another thing is present in this recital is some very smoothly integrated playing by the rhythm section: Billy Bauer (who has worked with everyone from Woody Herman, Benny Goodman to Lennie Tristano), Jack Lesberg (who has played with everyone from the New York City Symphony to Eddie Condon), Buzzy" Drootin (long a fellow Condonite with Lesberg) and Gene Schroeder (making it a minor Condon reunion). Ernie Caceres, incidentally, doubles on baritone sax, Peanuts Hucko on tenor.