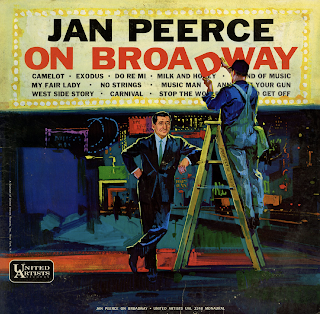 'Til There Was You
Jan Peerce On Broadway
Produced and Directed by Daniel Sloan
Orchestra under the Direction of LeRoy Holmes
Arrangements by LeRoy Holmes, Nick Perito and Marty Manning
Cover Design by Richard E. Sloan
Cover Illustration by Anderen
Liner by Norman Weiser
United Artists Records UAL 3248
1963

From the back cover: Jan Peerce, a native New Yorker, today is one of the most widely known singers in the world, performing in opera, on the concert stage, in radio, television and motion pictures. His renown is international in scope, his voice a beloved instrument brought into millions of homes via his numerous recordings. Peerce is primarily a classical artist of tremendous proportions, but his versatility is demonstrated when he moves into the realm of popular music with a zest and ability rarely found in this area.

The listing of personal appearances made by Peerce during his illustrious career would fill a complete book. His travels have covered the length and breath of the United States as well as practically every country on the face of the globe. Honors have been awarded him from Maine to California; from Israel to the Vatican City in Rome. He is a star among stars at the Metropolitan Opera in New York, and on-stage in Las Vegas. He is in actual fact a living legend.

Maria (West Side Story)
The Sweetest Sounds (No Strings)
I've Grown Accustomed To Her Face (My Fair Lady)
What Kind Of Fool Am I? (Stop The World I Want To Get Off)
Love Makes The World Go 'Round (Carnival)
'Til There Was You (Music Man)
Theme From Exodus
If Ever I Would Leave You (Camelot)
Shalom (Milk And Honey)
Make Someone Happy (De Re Mi)
They Say That Falling In Love Is Wonderful (Annie Get Your Gun)
Climb Every Mountain (The Sound Of Music)
Posted by By Mark Betcher at 4:31 PM