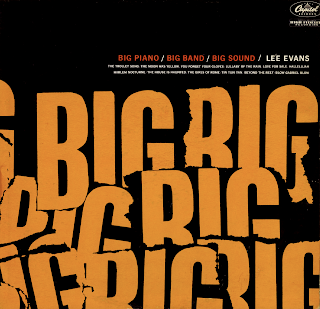 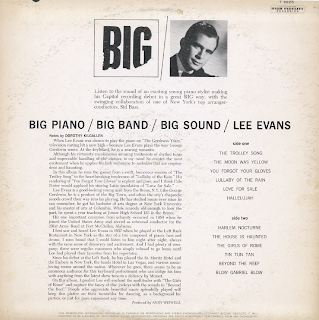 From the back cover: When Lee Evans was chosen to play the piano on "The Gershwin Years," television casting hit a new high – because Lee Evans plays the way George Gershwin wrote. At the keyboard, he is a soaring romantic.

Although his virtuosity encompasses amusing treatments of rhythm tunes and impeccable handling of the classics, to my mind he creates the most excitement when he applies his lush technique to melodies that are resplendent and haunting.

In this album he runs the gamut from a swift, humorous version of "The Trolley Song" to the heartbreaking tenderness of "Lullaby Of The Rain." His rendering of "You Forgot Your Gloves" is explicit and pure, and I think Cole Porter would applaud his stirring Latin translation of "Love For Sale."

Lee Evans is a good-looking young man from the Bronx, N. Y. Like George Gershwin, he is a product of the Big Town, and often the city's rhapsodic moods crowd their way into his playing. He has studied music ever since he can remember; he got his bachelor of arts degree at New York University and his master of arts at Columbia. While scarcely old enough to look the part, he spent a year teaching at Junior High School 123 in the Bronx.

His one important excursion from urbanity occurred in 1954 when he joined the United States Army and served as rehearsal conductor for the 291st Army Band at Fort McCellan, Alabama.

I first saw and heard Lee Evans in 1957 when he played at the Left Bank Restaurant in New York as the star of a trio composed of piano, bass and drums. I soon found that I could listen to him night after night, always with the same sense of discovery and excitement. And I had plenty of company; there were regular customers who simply refused to go home until Lee had played their favorites from his repertoire.

Since his debut at the Left Bank, he has played the St. Moritz Hotel and the Embers in New York, the Sands in Las Vegas, and various music-loving rooms around the nation. Wherever he goes, there seems to be an enormous audience for this keyboard perfectionist who can oblige his fans with anything from the latest show tune to a delicacy by Mozart.

The Trolley Song
The Moon Was Yellow
You Forgot Your Gloves
Lullaby Of The Rain
Love For Sale
Hallelujah
Harlem Nocturne
The House Is Haunted
The Girls Of Rome
Tin Tum Tan
Beyond The Reef
Blow Gabriel Blow
Posted by By Mark Betcher at 6:25 PM