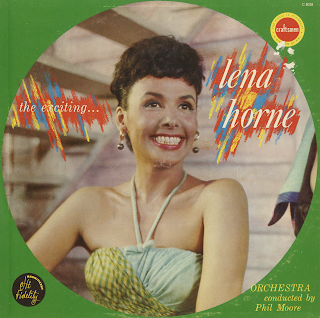 From the back cover: Her (Lena Horne) rise to fame was meteoric, indeed. At 16, she came from her Brooklyn home to her first job in the famed Cotton Club's chorus. Noble Sissle, appearing there at the time, heard her sing and immediately signed her as featured vocalist with his band. After touring with Sissle for two years, she auditioned for the vocalist's spot with the great Charlie Barnet aggregation by appearing without rehearsal on stage in front of an audience at New York's Apollo Theater. So pleased was he with the way she sang and was received, he signed her on the spot. She stayed with Barnet for a year, and then decided to try her luck in Hollywood.

While singing at Hollywood's Little Troc, she caught the eye and ear of Metro-Goldwyn-Mayer's Louis B. Mayer. He was so impressed by her talent, that he signed her for a part in MGM's "Panama Hattie." Featured roles soon followed in "Cabin In The Sky," "Ziegfeld Follies," and numerous other movie successes.

Today, she is one of the few entertainers who enjoys equal prominence in all facets of show business – screen, nightclubs, TV, recordings and the stage. Her most recent success has been as star in the Broadway smash "Jamaica."

Just Squeeze Me
More Than Than You Know
At Long Last Love
Sometimes I Feel Like A Motherless Child
Nobody Knows The Troubles I've Seen
Blue Prelude
Little Girl Blue
It's A Rainy Day
Glad To Be Unhappy
Frankie And Johnny
Posted by By Mark Betcher at 8:46 PM