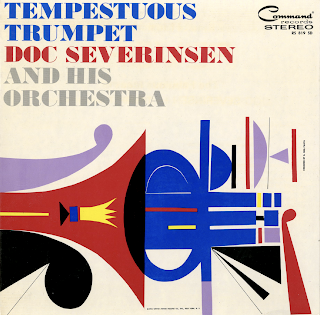 From the inside cover: Like any musician, Severinsen has been influenced by others who play his instrument but he has never allowed himself to be pinned down by the limitations of any particular style. His first idol was Harry James in the days after James had left Benny Goodman and was building a reputation for playing showy trumpet pieces with his own band. Doc's father, an amateur musician who played violin and decided to learn cornet while his son was studying trumpet, did not encourage this influence for, says Doc, "My father's a good musician and he didn't approve of schmaltz."

His next influence struck him when he was in the Army in 1945 and he heard Dizzy Gillespie's record of Groovin' High. About the same time he fell under the spell of Charlie Shavers who was then with Tommy Dorsey's orchestra. Later he was impressed by Billy Butterfield, Clark Terry and Clifford Brown but, Doc recalls, "Shavers and Did scared me the most."

Yet with all these trumpet styles buzzing around in his head, Severinsen has fallen into no set pattern.

"When I hear somebody that impresses me enough," he has explained, "it goes in my ear and stays there and eventually it comes out. But no as imitation."

After You've Gone
When It's Sleepy Time Down Sount
Night In Tunisia
Tenderly
I Can't Get Started
And The Angels Sing
Baubles, Bangles And Beads
Stardust
Mack The Knife
You Made Me Love You
Sleepy Lagoon
Sugar Blues
Posted by By Mark Betcher at 1:19 PM