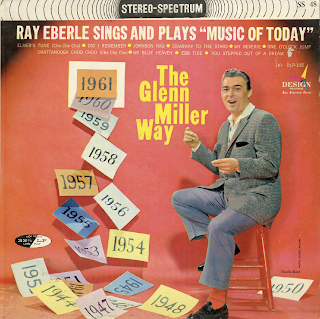 From the back cover: Ray Eberle the handsome, personable young man, was born in the thriving community of Hoosick Falls, New York, on January 19th.

His "big" break came at 18 when he was hired to fill the featured vocalist spot with the late, great Glenn Miller, who was organizing an orchestra. During the pre-war years when he was a mainstay of the Miller Band. Ray consistently won vocalist polls and was regarded by trade observers as the top band singer. His voice was heard from coast-to-coast on the Chesterfield program thrice weekly and while a featured member of the Glenn Miller Orchestra, Eberle was seen in two 20th Century Fox musicals, "Sun Valley Serenade" and "Orchestra Wives."

He put in six years as Glenn Miller's featured vocalist and toured the nation with the band. His name became a byword in music to the millions who flocked to see and hear the Miller band wherever it appeared. Among the many showcases where Elberle's name and fame were spread were: Paramount Theatre, New York; Oriental and Chicago Theatres in Chicago; Statler Hotel in New York; Palladium in Hollywood and all other top locations and theaters where top name orchestras regularly appear.

Going on his own just before the war broke out, Ray seemed headed for the top. He made eight feature films and six short subjects for Universal and was star of his own CBS radio show from California. However the call to the service cut short his budding career as a solo star.

Coming back again after a service hitch, Eberle started again as a single. Engagement in the East and Mid-west proved he had lost none of his polish or popularity. He has been featured twice a week on WPIJ-TV, and is a great favorite wherever he appears. His years of experience have given this star a good idea of what the people want, and Ray shows us on this LP how well prepared he is, both vocally and otherwise, to fill the bill.

Ray's feeling for Glenn Miller and his musicianship really comes to the front as he gives the songs that Glenn, himself, could have made famous if her were alive today.

Did I Remember
Johnson Ray
Stairway To The Stars
Elmer's Tune (Cha Cha)
My Blue Heaven
One O'Clock Jump
My Reverie
Chattanooga Choo Choo (Cha Cha)
Ebb Tide
You Stepped Out Of A Dream
Posted by By Mark Betcher at 7:03 PM