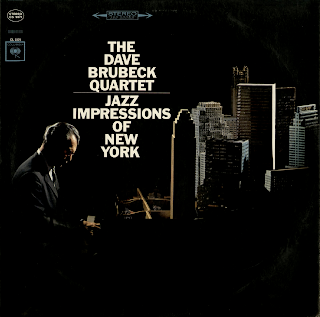 The music for "Mr. Broadway" was an early and critical consideration in the conception of the program. We sought a modern sound that would truly complement the sophisticated and pulsating beat that is so indigenous to New York. The choice of Dave Brubeck seems, in retrospect, to have been inevitable, but despite our united enthusiasm we could not have anticipated the enormous contribution of Dave Brubeck's music to "Mr. Broadway." The Brubeck signature with its marvelous and insinuating cross-rhythms and wild flights of imagination, has given new and distinctive dimension to our television series. He is a man of rare talent, vitality and poetry, and he has contributed all of this to "Mr. Broadway." I am proud of this music. – David Suskind, Executive Producer

From Billboard - January 23, 1965: All of the excitement and creativity usually associated with the music of Dave Brubeck is present in this commercial package. Brubeck give distinctive impressions of New York. Supported by Paul Desmond on alto sax; Joe Morello, drums, and Eugene Wright on bass, the impressions range from Greenwich Village to Harlem.