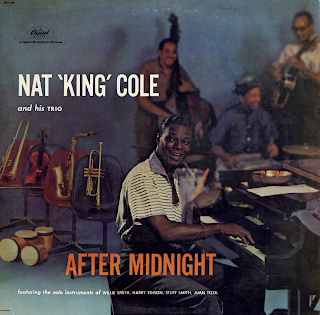 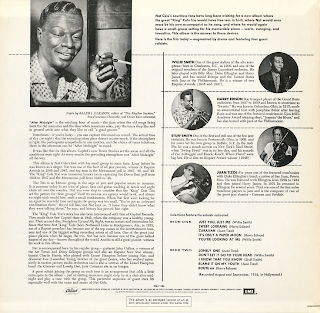 Lonely One
After Midnight
Nat 'King' Cole and His Trio
Featuring the solo instruments of Willie Smith, Harry Edison, Stuff Smith and Juan Tizol
Capitol Records
A Capitol Monophonic Re-Issue
This album is an abridged version of the album previously issued under the same title
Recorded August and September, 1956, in Hollywood
Capito SM-11796
1978

The Trio is an historic group in the saga of jazz and popular music in America. It is common today to see trios of piano, bass and guitar working in hotels and night clubs all over the country. Did you ever stop to consider that the "King" Cole Trio set the pattern for these groups? Until its success, no agency would book, and almost no night club would hire, such a small combination. When Nat first week looking for an agent he was told time and time again the group was too small. "You've got an awkward combination there," they told him, but Nat kept on. "I knew they didn't know what they were talking about," he says, and history has proven him right.

The "King" Cole Trio's story has also been interwound with that of Capitol Records. They made their first Capitol discs in 1943, when the company was a healthy youngster. Their second disc, Straighten Up And Fly Right, was an instant and tremendous hit. Since that time Nat "King" Cole (born Nathaniel Cole in Montgomery, Ala., in 1919, son of a Baptist preacher) has become one of the top names in the entertainment business and one of the biggest selling recording artists of all time. One of the great jazz piano players when he began the trio, Nat has now become one of the great ballad singers of our day – known throughout the world. And he is still a great pianist: witness his work in this album.

Nat is accompanied here by his regular group – guitarist John Collins, a veteran of the Art Tatum and Dizzy Gillespie groups and also an Esquire New Star winner; bassist Charlie Harris, who played with Lionel Hampton before joining Nat; and drummer Lee (Leonidas) Young, brother of the great Lester, who has worked extensively in motion picture studio orchestras and is also a veteran of the Lionel Hampton band. On Caravan and Lonely One, Jack Costanzo sits in on bongos.

Willie Smith - One of the great stylist of the alto saxophone; born in Charleston, S. C., in 1908, and one of the original members of the Jimmy Lunceford orchestra. He later played with Billy May, Duke Ellington and Harry James, and has toured Europe and the United States with Jazz at the Philharmonic. He is winner of two Esquire Awards (1945 and 1947).

Harry Edison - Star trumpet player of the Count Basie orchestra from 1937 to 1950 and known to musicians as "Sweets." He was born in Columbus, Ohio, in 1915, made an international tour with Josephine Baker after leaving Basis and was on of the featured musicians in Gjon Mili's Academy Award winning short, "Jammin' The Blues," and has also toured with Jazz at the Philharmonic.

Stuff Smith - One of the first and still one of the few jazz violinists. He was born in Portsmouth, Ohio, in 1909, and for years led his own group in Buffalo, N.Y. In the mi-30s, he was a smash success on New York's 52nd Street, when "Swing Stree" was in its hey-day, and his records of I'se A-Muggin' and Knock, Knock, Who's There? were big hits. He is also an Esquire Award winner (1946).

Juan Tizo - For years one of the featured trombonists with Duke Ellington's band; a native of San Juan, Puerto Rico. He was featured with Ellington from 1929 to 1944 and then joined Harry James. In 1951 he returned to Ellington for several years. Tizol was one of the first valve trombone players in jazz and is the composer of two of the great jazz classics – Caravan and Perdido.

Just You, Just Me
Sweet Lorraine
Caravan
It's Only A Paper Moon
You're Looking At Me
LonelY One
Don't Let It Go To Your Head
I Know That You Know
Blame It On My Youth
Route 66
Posted by By Mark Betcher at 1:03 PM