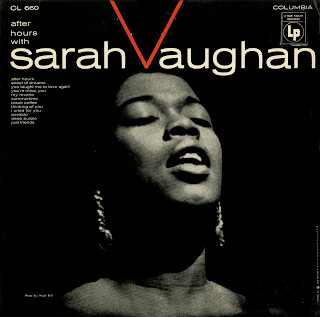 From the back cover: Rarely a popular singer in the commercial sense, Sarah's talents are nevertheless both popular and commercial, as the proprietors of any club or theater are able to attest. (For that matter, several of the numbers in this collection, notably "Thinking Of You", "I Cried For You" and "Perdido", made the best-seller lists). This sort of thing is a steady note in her career, which has gone forward and upward steadily ever since her debut. Her first public appearance were in Newark, N.J., where she sang in the choir of her church. Entering an amateur contest at the Apollo Theater in New York, she won not only the first prize, but a week's engagement, appearing with Earl Hines' orchestra. Before the week was up, Hines offered her a permanent berth with his group, which also featured Billy Eckstine.

After Hours
Street Of Dreams
You Taught Me To Love Again
You'er Mine, You
My Reverie
Summertime
Black Coffee
Thinking Of You
I Cried For You
Perdido
Deep Purple
Just Friends
Posted by By Mark Betcher at 9:44 PM