The Moods Of London - Philip Green 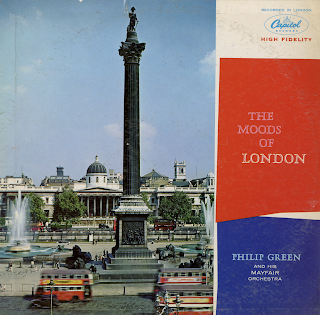 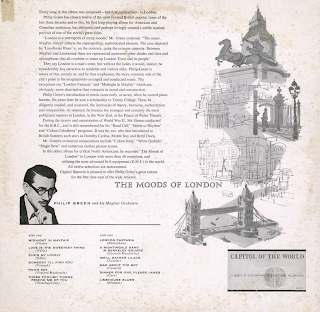 From the back cover: Philip Green's introduction to music came early, at seven, when he started piano lessons. Six years later he won a scholarship to Trinity College. There he diligently studied, and mastered, the intricacies of theory, harmony, orchestration and composition. At nineteen, he became the youngest and certainly the most publicized maestro in London, in the West End, at the Prince of Wales Theatre.

During the terrors and uncertainties of World War II, Mr. Green conducted for the B.B.C., and is still remembered for his "Band Call," "Salute to Rhythm" and "Cuban Caballeros" program. It was he, too, who first introduced to British listeners such stars as Dorothy Carless, Monte Ray and Beryl Davis.

In this debut album for critical North Americans, he recorded "The Moods Of London" in London with more than 40 musicians, and utilizing the most advanced hi-fi equipment (E.M.I.) in the world.

From Billboard - April 20, 1957: British maestro's first Capitol LP grooving, while strictly in the pattern of the current plethora of lush mood music, packs a lot of promise. Set comprises a dozen top-flight arrangements of great British favorites, culled from over three decades. Such items as "Berkeley Square," "Some Day I'll Find You," "Dinner For One, Please James," "Limehouse Blues," etc., are given slow delivery. Jocks could well give this exposure, and spark it even in a glutted market.

Midnight In Mayfair
Love Is The Sweetest Thing
She's My Lovely
Someday I'll Find You
Room 504
These Foolish Things Remind Me Of You
London Fantasia
A Nightingale Sang In Berkeley Square
We'll Gather Lilacs
Mad About The Boy
Dinner For One, Please James
Limehouse Blues
Posted by By Mark Betcher at 2:28 PM