It's A Bird! It's A Plane! It's SUPERMAN 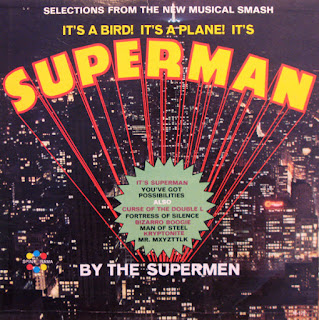 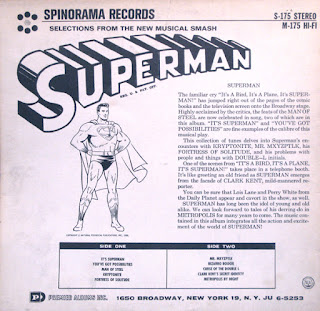 It's Superman
It's A Bird! It's A Plane! It's SUPERMAN
Selections From The New Musical Smash
By The Superman
Premier Albums Inc., NY, NY M-175

This is a great album filled with fun and cheesy 60s pop ear candy. There is only one track with a vocal treatment: It's Superman

Wikipedia: The 1966 Broadway musical It's a Bird... It's a Plane... It's Superman!, starring Bob Holiday, was scored by Charles Strouse and Lee Adams. The script was written by David Newman and Robert Benton, who would go on to write the second draft of the screenplay for the first Superman film (1978).
Posted by By Mark Betcher at 10:03 AM