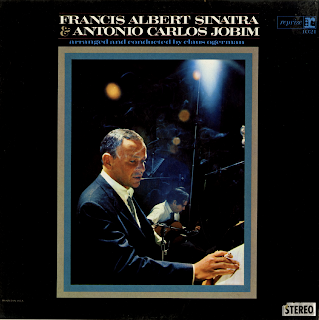 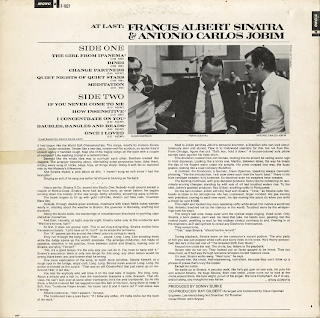 Quiet Nights Of Quiet Stars
Francis Albert Sinatra & Antonio Carlos Jobim
Produced by Sonny Burke
Co-produced by Ray Gilbert
Arranged and Conducted by Claus Ogerman
Cover Photo: John Bryson
Art Direction: Ed Thrasher
Engineer: Lee Herschberg
Reprise 1021
1967
From the back cover: During playback, Sinatra leans on the conductor's vacant podium. The only parts of him you see just popped white cuffs and worry lines in his brow. He's Worry personified, like he's in the lat reel of "The Greatest Birth Ever Given."
Around him circle the rest. They circle, too, listens to the playback.
Grown men do not cry. They instead put on faces gauged to be intent. They too listen hard, as if half way through someone whispers buried treasure clues.
It's over. Sinatra walks away. "Next tune," he says.
Around him, the circle. Half-stammering, half-silent, because they can't think up a phrase of praise that's truly the topper.
Except for Jobim.
He walks up to Sinatra. A peculiar walk, like he's got gum on one sole. He puts his arm around Sinatra. He hugs Sinatra. Both men smile. Jobim turns out to look at the circle around them. His face alight, proud of his singer. His face triumphant. as if to say, and all along, you thought he was Italian. – Stan Cornyn
The Girl From Ipanema
Dindi
Change Partners
Quiet Nights Of Quiet Stars
Meditation
If You Never Come To Me
Now Insensitive
I Concentrate On You
Baubles, Bangles and Beads
Once I Loved
Posted by By Mark Betcher at 6:58 PM