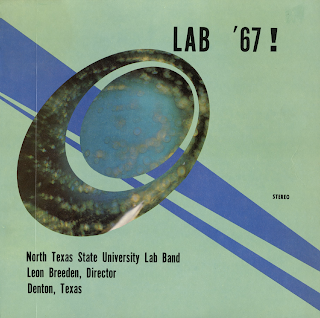 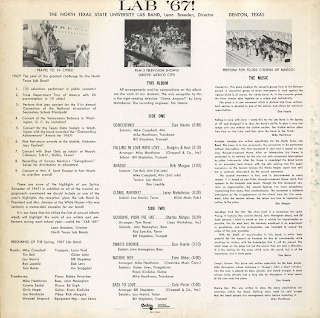 Anadge
Lab '67!
The North Texas State University Lab Band
Leon Breeden, Director
Century Custom Recording
From the back cover: These are some of the highlights of our Spring Semester of 1967! In addition to all of the musical engagements mentioned we should include as one of the year's highlights the reception given the Lab Band by President and Mrs. Johnson at the White House – this was certainly a memorable occasion for our band!
It is our hope that this will be the first of annual albums which will highlight the work of our writers and performers during each school year – watch for "LAB '68!" – Lou Breeden, Director - North Texas Lab Bands
Also from the back cover: Anadge was written specifically for the North Texas Lab Band. The piece is in two movements, the movement to be performed without interruption. The first movement is slow and is based on one long through-composed theme. After an introduction this theme is presented in its entirely by the alto sax with occasional interruptions by other instruments. After the theme is complete the band builds to an extremely loud climax, with the alto soaring into his upper harmonics. As the tension relaxes the theme begins again (sax soli) but is suddenly interrupted by the second movement.

The second movement is fast, and is jazz-oriented in every respect. It is based on one 8-bar through-composed theme which first appears in the trumpets and tenors. Though the first movement contains no improvisation, the second features two tenor saxophones improvising first alone, then simultaneously. The movement is suddenly interrupted by the re-appearance of the climax from the first movement. After the tension relaxes, the tenors are free to improvise on ending the piece. – Bob Morgan