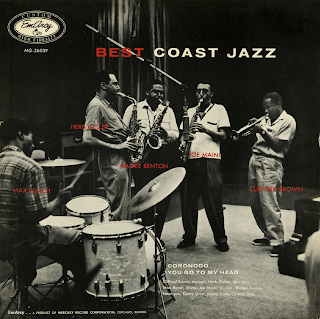 Coronado
Best Coast Jazz
EmArcy Custom MG 36039
A Product of Mercury Records Corporation
1954
All Stars
Clifford Brown - Trumpet
Herb Geller - Alto Sax
Max Roach - Drums
Joe Manini, Jr. - Sax
Walter Benton - Tenor Sax
Kenny Drew - Piano
Curtis Counce - Bass
Photo (Left to Right): Max Roach, Herb Geller, Walter Bention, Joe Mani and Clifford Brown
From the back cover: The personnel on this date represented an amalgamation, for the first time, of a pair of important EmArcy attractions, both of whom have made individual reputations through various LP's on which they have appeared either as leaders or as sidemen on this label during the past year. They are Herb Geller and that two-headed combo-leading team of Clifford Brown and Max Roach.
Clifford and Max, as you should certainly know by now, are currently leading a highly successful quintet. Clifford's trumpet work and Max's fantastic drumming won them a couple of Down Beat awards and, even more important, the respect and adulation of a flock of other musicians from coast (California) to coast (English channel and points east)>
Herb Geller, an unorthodox west coast jazzman, inasmuch as he was born and raised in Los Angeles, is a graduate of the bands of Joe Venuti, Claude Thornhill, Jerry Wald and Lucky Millinder, and has worked with numerous California outfits, including those of Shorty Rogers, Billy May, Maynard Ferguson, Howard Rumsey and Chet Baker. He has been heard with his own quartet as well as in jam sessions and other dates on EmArcy.
Herb has some competition on this session, in the persons of two lesser known but highly promising saxophonists, Joseph Maini, Jr., alto and tenor saxophonist, claims the unusual distinction of having been presented with a tenor saxophone by the great Charles "Yardbird" Parker himself. Now 25  years old, he has worked with Alvino Rey, Noro Morales, Claude Thornhill and other name bands; during a couple of years he spent in New York he became friendly with the immortal Bird, as you may well deduce from these sides. Usually his work and Geller's are easily distinguishable by Maini's more biting tone; in case you are ever in doubt, a helpful hint is the fact that the last solo and closing cadenza on Autumn In New York are by Herb.
Walter Benton, the tenor saxophonist on these performances, is also comparatively new to records, though he has been heard on a few sides with Kenny Clarke. Only 22 years old, he is from Los Angeles and was only recently discharged from the Army. He has been working with small combos around Seattle.
In addition to the formidable Max Roach, the rhythm section here includes two distinguished young gentlemen, both well known to followers of the new jazz. Kenny Drew, the pianist, made his professional debut as accompanist at the Pearl Primus dance school. He has been heard in night clubs and recordings with Coleman Hawkins, Stan Getz, Lester Young and from 1952 until late '53 was on tour with Buddy de Franco.
Curits Counce, the bassist was born in Kansas City in 1926 and made his bow at the age of 15 with Nat Towles' orchestra. Settling in Los Angeles some ten years ago, he worked for four years with Edgar Hayes' combo and was also heard frequently with Benny Carter, Wardell Gray and Billy Eckstine. Until a few months ago he was a regular member, for almost two years, of Shorty Rogers' outfit in Hollywood. An admirer of the immortal Jimmy Blanton, he is considered to be the outstanding batsman on the west coast.
These two king sized performances – the jumping riff blues tune Coronado and You Go To My Head – were recorded in Los Angeles on August 10, 1954. Since more than a quarter of an hour is devoted to each tune, it will come as no surprise to you that every member of this wonderful group is given ample opportunity to express his ad lib feelings with no holds barred and no restrictions of any kind We feel that the results certainly justify the appropriate description of these sides as "Best Coast Jazz."
Coronado
You Go To My Head
Posted by By Mark Betcher at 5:27 PM