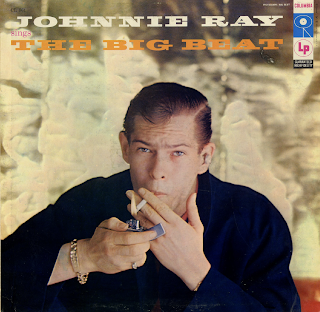 Lotus Blossom
The Big Beat
Johnnie Ray
Arrangements by Ray Ellis and Ray Conniff
Columbia Records CL 961
1957
From the back cover: It was 1951 when Johnnie Ray astonished everyone with his remarkable performances of Cry and The Little White Cloud That Cried, and he became a major star with almost supersonic speed. He was born in Roseburg, Oregon, in 1927, indicating musical talent at an early age, and confirming the indications when he reached fifteen and shared a Portland radio show with Jane Powell. A few years later he took off for Hollywood, hoping to break through the ranks of anonymity, and served his term as soda dispenser, carhop, movie extra and various other employments before landing a job as a pianist in a night club. Engagements in various small clubs followed, leading him farther and father east. He was singing and playing one night at the Flame Club in Detroit when the sharp ear of a Columbia Records official caught the distinctive and compelling character of his singing, and he was signed at once. His first record sold well enough, considering that he was relatively unknown, and the second consisted of the coupling mentioned above. Since that time he has been starred on radio, television, in the movies and in night clubs, and has made a series of outstandingly successful appearances in England, as well as extended tours of Australia and other outlying sections of the world.
Pretty-Eyed Baby
How Long Blues
Sent For You Yesterday
I'll Never Be Free
I'm Gonna Move To The Outskirts Of Town
Shake A Hand
Lotus Blossom
Every Day
I Want To Be Loved
I Miss You So
Trouble In Mind
So Long
Posted by By Mark Betcher at 8:40 AM