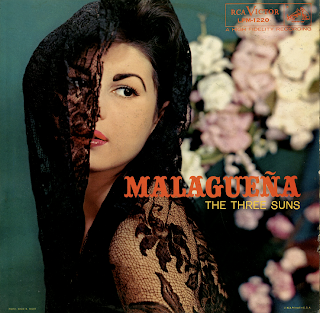 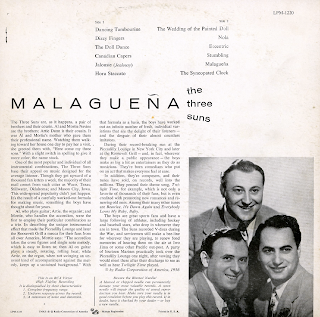 From the back cover: The Three Suns are, as it happens, a pair of brothers and their cousin. Al and Mortie Nevins are the brothers; Artie Dunn is their cousin. It was Al and Mortie's mother who gave them their professional name. Watching them walking toward her house one day to pay her a visit, she greeted them with, "Here come my three sons." Which a slight switch in spelling to give it more color, the name stuck.

One of the most popular and individual of all instrumental combinations. The Three Suns base their appeal on music designed for the average listener. Though they get upward of a thousand fan letters a week, the majority of their mail comes from such cites as Waco, Texas; Stillwater, Oklahoma' and Mason City, Iowa. This wide-spread popularity didn't just happen. It's the result of a carefully worked-out formula for making music, something the boys have thought about for years.

Al, who plays guitar; Artie, the organist; and Mortie, who handles the accordion, were the first to employ their particular combination as a trio. In describing the unique instrumental effect that made the Piccadilly Lounge and later the Roosevelt Grill a mecca for their fans from all over America, Mortie says: "The accordion take the cross figures and single note melody, which is easy to listen to, then Al on guitar plays a steady, rotating, rolling beat; while Artie, on the organ, when not swinging an unusual kind of accompaniment against the melody, keeps up a sustained background.' With that formula as a basic, the boys have worked out an infinite number of fresh, individual variations that are the delight of their listeners – and the despair of their almost countless imitators.

During their record-breaking run at the Piccadilly Lounge in New York City and later at the Roosevelt Grill – and, in fact, wherever they make a public appearance – the boys make as big a hit as entertainers as they do as musicians. They're born comedians who put on act that makes everyone feel at ease.

In addition, they're composers, and their tunes have sold, on records, well into the millions. They penned their theme song, Twilight Time, for example, which is not only a favorite of thousands of their fans, but is even credited with promoting new romances and renewing old ones. Among their many other tunes are Beatrice, It's Dawn Again and Everybody Loves My Baby, Baby.

The boys are great sports fans and have a large following of athletes, including hockey and baseball stars, who drop in whenever they are in town. The Suns recorded V-discs during the War, and servicemen still make a bee-line for whatever they are playing, to renew found memories of hearing them on the air at Iwo Jima or some other Pacific out-post. A party of fourteen Marines practically took over the Piccadilly Lounge one night, after vowing they would meet there after their discharge to see as well as hear Twilight Time played.