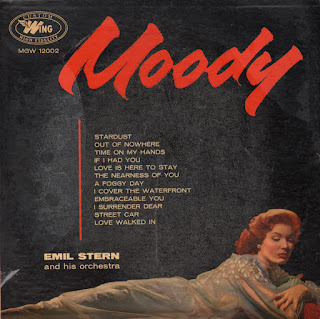 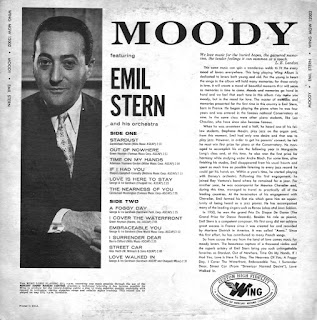 From the back cover: The master of melodies and memories presented for the first time in this country is Emil Stern, born in France. He began playing the piano when he was four years and was entered in the famous national Conservatory at nine. In the same class were other piano students, like Leo Chauliac, who have since also become famous.

When he was seventeen and a half, he heard one of his fellow students, Stephane Moujin, play jazz on the organ and form this moment, Emil had only one desire and that was to play jazz. However, in order to get his parents' consent, he felt he must win first prize for piano at the Conservatory. He managed to accomplish his aim the following year in Marguerite Long's class and, at this time, he also won the first prize for harmony while studying under Andre Block. For some time, after finishing his studies, Emil disappeared from his usual haunts and spent as much time as possible listening to every jazz record he could get his hands on. Within a year's time, he started playing with Dorsey's orchestra. Following the first engagement, he joined Ray Ventura's band where he remained for a year. For another year, he was accompanist for Maurice Chevalier and, during this time, managed to travel to practically all of the leading countries. At the termination of his engagement with Chevalier, Emil formed his first trio which gave him an opportunity of being heard as a jazz pianist. He has accompanied many of the leading singers such as Renee Leas and Jean Sablon.

In 1953, he won the grand Prix Du Disque De Danse (The Grand Prize for Dance Records). Besides his role as pianist, Emil Stern is a competent composure. His first song did not achieve great success in France since it was created for and recorded by Marlene Dietrich in America. It was called "Assez." Since this first effort, he has contributed to many French songs.