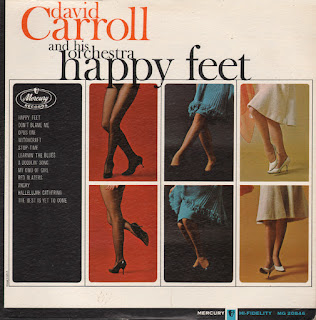 "Modern vocal stylings" in my opinion, might have been added so that Carroll's 1964 Mancini-like approach would sound less "dated"or at least "well-worn". Only on Hallelujah Gathering do the Dick Williams Singers background vocal treatments seem to mesh completely and creatively with the instrumental arrangement.

In hindsight, regardless of how the album shoehorns into the "light-pop" musical timeline, the instrumental arrangements were strong enough to stand on their own sans The Dick Williams Singer's contribution. The sample above was one of several tracks which Carroll or Quincy Jones decided not to use the Dick Williams Singers. Cool stuff.

My Kind Of Girl
A Doodlin' Song
Learnin' The Blues
Don't Blame Me
Opus One
Angry
Blue Blazer
Witchcraft
Stop-Time
Hallelujah Gathering
The Best Is Yet To Come
Happy Feet
Posted by By Mark Betcher at 6:02 AM