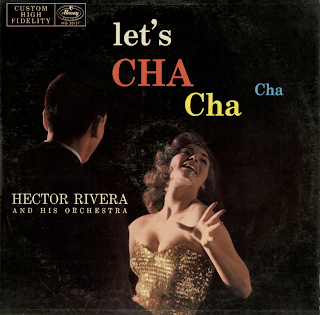 From Billboard - February 9, 1957: This is a very impressive Latin group. Rivera, relatively new on the Latin band scene, is pianist and arranger. The performances have a driving pace and that precise technique which the best of the Latin bands display. All the material in the package was written or adapted by Rivera – one of the adaptations being the "Chopsticks Cha Cha Cha." Fine wax in its category.

And at least one reason why this mid-50s Latin recording is dynamic can be found on the back cover. Rivera studied with Gil Fuller who arranged for Kenton, Gillespie and Machito. You can heard a touch of Kenton's "style" on this recording. The set features diversity in arranging and engineering.

From the back cover: Hector Rivera is the new home on the Latin-American scene and for the first time Mercury is proudly presenting this sensational artist on records.

Hector Rivera is a latin born in Manhattan in 1933. His father and mother are both native Puerto Ricans and both are accomplished musicians.

Hector began his musical career playing piano with the Jose Rodriguez Rhumba band, which played local theaters, clubs dances, and wedding. Feeling a desire for greater expression of his ideas and talents Hector enrolled at the Lecompte Academy of Music in New York and studied under Luis Varona, and it was there that he learned about the Mambo.

Later, working with the famous Elmo Garcia orchestra, he began his composing and arranging experiments, the result of which are presented by Mercury in this album.

In the spring of 1952 Hector decided to toss his hat into the ring of Latin Band leaders and organized his first orchestra which he call "Los Tubos Del Mambo." On the brink of success and during an engagement at the Palladium in New York, Hector received his greetings from the President and was inducted into the Army. After a tour of duty in Korea his military organization was sent to Guan, where he was given an assignment with Special Services to compose and arrange a production number of a G.I. show telling the story of the Mambo.

After his discharge from the Army in 1955, Hector resumed his musical career studying modern arranging and composing with Gil Fuller, former arranger for Stan Kenton, Dizzy Gillespie and Machito and playing piano with Alfredito's orchestra and Moncho Lena – "the King of the Plena."