Sound In The Eighth Dimension 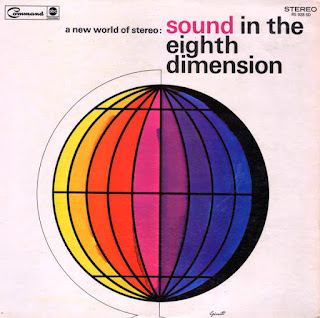 The album title refers to a "new" studio techniques that included 8-channel recording.

From Billboard - March 30, 1968: The result of two years of experimentation (this album) is especially exciting as songs such as "El Gato Montes" (a bull fight) and "South Rampart Street Parade" take on a "live" sound.

This Command/ABC period release was not produced in the typical (Enoch Light/Command) book-fold fashion, in that there are no details about the artists printed on the inside. The space was used to explain the engineering process, which is outstanding, even if the LP plays through like a "test" record.

Limehouse Blues
Ebb Tide
Talk To The Animals
The Heart
Spanish Eyes
March Of The Space Cadets
South Rampart Street Parade
The Sound Of Music
El Gato Montes
Blue Hawaii
Get Me To Church On Time
Posted by By Mark Betcher at 4:54 AM