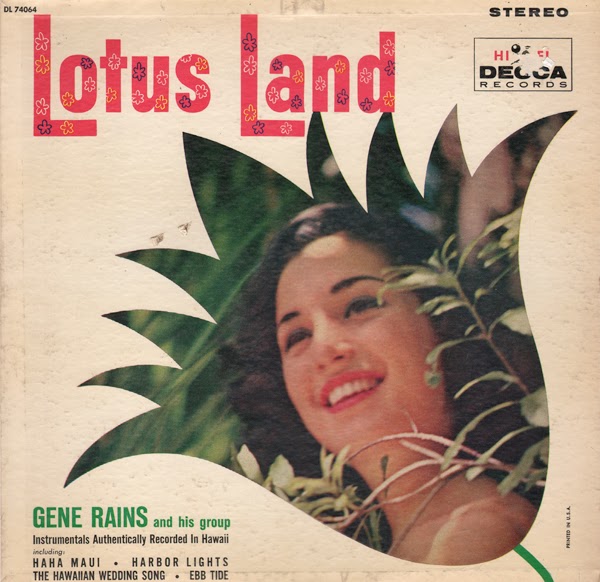 Apparently this album was left behind, on a well-picked over discount shelf, due to the cover looking a bit like many other vintage budget Hawaiian music LPs most collectors tend to avoid. At least, that was my opinion as I glanced briefly at the cover. Of course, this is a fine (and first, for Rains', according to his wiki page) exotica album.

The tracks are laid down on the vinyl with no "space" between the songs so that blend one into the next as if the record was made in one take, as one piece of music. This effect produces a nice sonic trip for the listener. Likened to Denny and Lyman, Rains work on this album is as engaging as any exotica record you might search out for your collection

Excerpt from the back cover: This (…you can't hide talent) seems to hold up in the case of Gene Rains, who comes to us from Hawaii in the wake of such noted artists as Alfred Apaka, George Kainapau, Mahi Beamer, Sterling Mossman, Martin Denny, Arthur Lyman, Charles L. K. Davis and others who have made their marks in the recording world. As a matter of fact, it was the late Alfred Apaka who discovered the Rains group in some obscure bar in Honolulu and signed them for the build-up in the famous Shell Bar of the Hawaiian Village Hotel in Waikiki. We happened to be there in September '59 on a recording junket, chiefly concerned with recording three albums with Apaka, and Alfred insisted that we listen to Gene and his quartette.

We were very much impressed with what they were doing, as well as the way they were doing it. Incredible as it may seem, the four young men on the stand very often played as many as seven or eight instruments at the same time, thereby amplifying the ensemble sound far beyond the normal expectancy. Then too, the variety of instruments were provocative, not only for their rarity but for the unusual sounds they produced. Among these, used to very effective advantage, are rhythm-logs, conch shells, a samisen or two, nose-flutes, Burmese bells, wind-chimes of both wood and glass and many kinds of percussive implements. – Sonny Burke