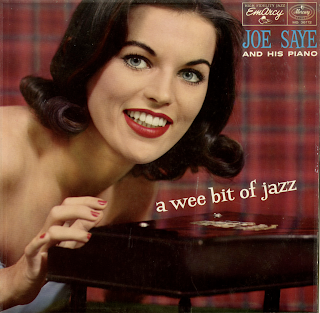 Terrific cover art graces this fine mid-50s jazz set. Saye seems to have disappeared (from online references) after the release of his next (third) EmArcy album titled, A Double Shot Of Joe Saye (1958).

From the back cover: Joe Saye, an indomitable 34-year-old pianist who had been born in Glasgow, Scotland and had become known and appreciated throughout Britain, arrived in America in December 1955. The main purpose of the trip of Joe and his wife was to save the sight of their baby son's eye; and happily, that goal has been achieved. Joe himself has been sightless since two.

Joe's professional fortunes in America, however, have been variable. In as combatively competitive an area as is American music, it is difficult to establish a reputation quickly. Yet gradually, a public for Joe has been growing' and throughout the months of unpredictability and strain, Joe has consistently maintained an unquenchable, burred wit and the conviction that if it is given a fair chance to be heard, his music will win as many adherents here as in Europe.

The release of his first EmArcy album, Scotch on the Rocks (MG 36072) quickened public and professional interest in Joe. One disc jockey, for example, Dwight Cappell of WWSW in Pittsburgh wrote and announced four programs on Joe's music. "That was the biggest thrill I've had," Joe declares, "since I've been here."

Joe has played the Midway in Pittsburgh and was booked back there; Birdland; and since April 1957, has been a Sunday night regular at the Embers on New York's East Side. He also spent two months in the spring of 1957 in a sunnily successful engagement as a single at Nassau in the Bahamas. He has also worked Washington, D.C.; and the Cork 'n' Bib on Long Island. With the release of this second Saye collection, the doors may finally remain open.

Joe's associates on the session include Herbie Mann, an active modern jazz flutist who has had several albums under his own name. Barry Galbraith, Milt Hinton and Osie Johnson has worked many record dates together that they have long since become fused into a flowing, firm rhythm team that is a reassuring asset in almost any non-operatic context.

Joe did all the arranging and the originals are his adaptations of old Scottist airs.

The Reel-ist
Too Late Now
Scotch Tweed
Happiness Is Just A Thing Called Joe
Say It Isn't So
The Waltz In Swingtime
Stop Your Ticklin' Jock
Everything I Have Is Yours
Cockle Chowder
I Love You
My Funny Valentine
The Old Music Master
Posted by By Mark Betcher at 3:36 AM