Everybody Loves A Lover - Eric Delaney 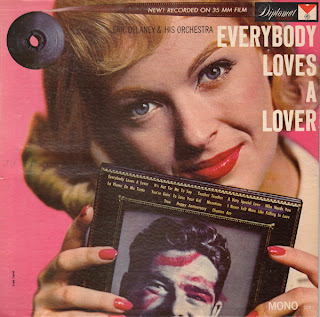 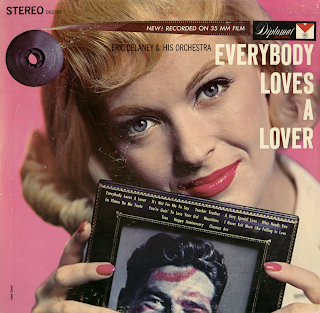 From the back cover: Eric Delaney is one of the only two people for whom the BBC have held up the news bulletin, The other was Sir Winston Churchill.

He is the most publicized band leader in Britain today and is one of the Youth's appointed leaders.

Eric Delaney's rapid rise to eminence is without precedent in the world of dance music. In 1954 he was drumming for Geraldo; today he is one of the most famous and sought-after entertainers in the country.

Behind Eric's success is a lifetime of hard work, practice and sheer determination. His parents bough him a sixpenny Woolworth's drum when he was eighteen-months old. He has progressed to the multi-media-drum kit that dazzles the audience today.

Eric was born in Acton, London on May 22, 1924. He studied drums under Max Abrams and, at thirteen, undertook his first professional engagement when he formed a band to play at the Brent Bridge Hotel in North London. A year later, he joined Harry Roy's Juvenile Band and also toured with Hughie Green's Road Show. A series of dance band engagements led up to his joining the RAF, in which he served for four years.

Demobilized, his brilliant percussion work soon came to notice of top band leaders and he was engaged to play with Stephan Grappelly, The Squadronaires and Geraldo. He left the latter in 1954 to form his own orchestra, but his venture almost failed to materialize when, two weeks before his debut, he caught his hand in the fan belt of his car, lost a finger and seriously injured another. When he left the hospital, he sat for hours at his kit perfecting a new way of handling the sticks.

The band's first recording, "Oranges and Lemons", became a big seller and the recording company awarded Eric a Silver pressing. The band was selected to play before H.M. The Queen at the 1956 Royal Command Variety Performance.
Delaney's obituary

Everybody Loves A Lover
A Very Special Love
Teacher, Teacher
True
Meantime
It's Not For Me To Say
Happy Anniversary
Chances Are
Who Needs You
I Never Felt Like Falling In Love
You're Gonna Lose Your Gal
La Plume De Ma Tante
Posted by By Mark Betcher at 3:26 AM