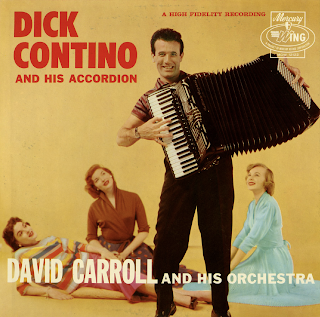 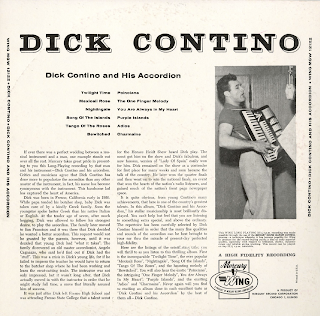 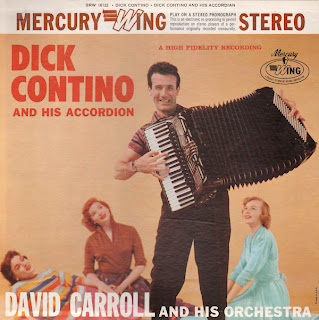 From the back cover: Dick was born in Fresno, California early in 1930. While papa tended to his butcher shop, baby Dick was taken care of by a kindly Greek family. Soon the youngster spoke better Greek than his native Italian or English. At the tender age of seven, after much begging, Dick was allowed to follow his strongest desire, to play the accordion. The family later moved to San Francisco and it was there that Dick decided he wanted a better accordion. This request would not be granted by the parents, however, until it was decided that young Dick had "what it takes". The family discovered an old master accordionist, Angelo Cagnazzo, who said he'd find out if Dick had the "stuff". This was a crisis in Dick's young life, for if he failed to impress the teacher he would have to return to the butcher shop where he had been working and learn the meat-cutting trade. The instructor was not only impressed, but it wasn't long after, that Dick actually moved in with the instructor in order that he might study full time, a move that literally assured him of success.
It was just after Dick left Fresno High School and was attending Fresno State College that a talent scout from the Horace Heidt Show heard Dick play. The scout got him on the show and Dick's fabulous, and now famous, versos of "Lady Of Spain" easily won for him. Dick remained on the show as a contender for first place for many weeks and soon became the talk of the country. He later won the quarter finals and then went on to win the national finals, an event that won the hearts of the nation's front page newspaper space.
It is quite obvious, from young Contino's many achievements, that here is one of the country's greatest talents. In this album "Dick Contino and his Accordion," his stellar musicianship in most brilliantly displayed. You can't help but feel that you are listening to something extra special, and above the ordinary. The repertoire has been carefully selected by Dick Contino himself in order that the many fine qualities and sounds of the accordion can be best brought to your ear thur the miracle of present-day perfected high-fidelity.

Twilight Time
Mexicali Rose
Nightingale
Song Of The Islands
Tango Of The Roses
Poinciana
The One Finger Melody
Purple Islands
Adios
Posted by By Mark Betcher at 9:40 PM