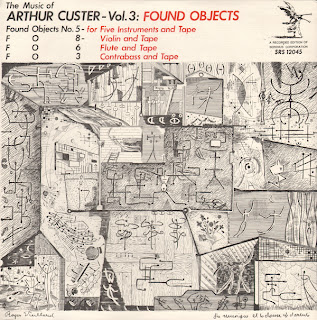 Here is a sample from an obscure avant grade album I picked up today. Enjoy the sealed minty fresh goodness.

The cover art is a reproduction of an engraving by Roger Vieillard titled "La Musique et la Danse".

Excerpt from the back cover: Serenus asked me to provide some notes to accompany this recording of four of my "found objects" pieces, and as I undertake to express my thoughts I discovered that I have been hanging onto some ideas that I'd never put into words before, and that there were other subliminal thoughts of which I became conscious at the same time. – Found Objects No. 5: The second aspect has to do with the relationship of the performer to the audience. The performer is a "player" in the theatrical as well as the musical sense. Because "Sight Music" is for players (note the title) rather than the instrument, certain actions are called for which are at times primarily visual and therefore dramatic. It is a piece to see as well and hear, a piece to entertain, an "entertainment" whose purposeful irony derives from the confluence of serious intentions and playful results.
Posted by By Mark Betcher at 3:03 PM