The Moon And The Stars - Harry Arnold 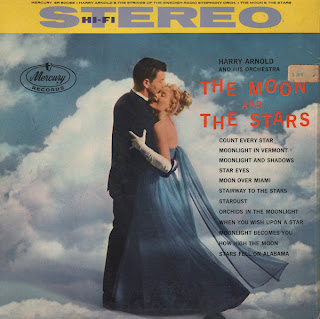 From Billboard, August 17, 1959: Delightfully orchestrated and performed mood music, with tunes keyed to stars, moon and the celestial scene. The Arnold group features strings and woodwinds in a slow, languorous beat, similar to that heard on earlier Jackie Gleason albums. Attractive listening, well recorded with the only drawback being the lack of name power in the overly competitive mood field.

Yes, when I listened to this album, I also thought of Gleason's work in that the album features a "concept"which Gleason was so good at creating and above average arrangements.
Posted by By Mark Betcher at 7:28 AM