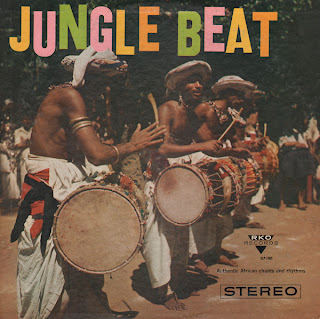 From March 9, 1959 Billboard: Haitian Subri Moulia, a student of primitive music, and his Equatorial group, do an interesting job on primitive rhythms and chants. Disk includes Haitian, Brazilian and South American chants.

The Billboard artist mention isn't found on the jacket.

The music found on the B side is music that I have heard on a number of "jungle drums" albums released from various labels including Promenade titled Taboo. The music also appears on a Silver Seal pressing as Taboo.  I also believe the recording appears on Pirouette as Congo Percussion.

The music is on both sides is terrific. The mystery is how those side 2 tracks seem to have made the rounds in the late 50s.
Posted by By Mark Betcher at 5:44 PM